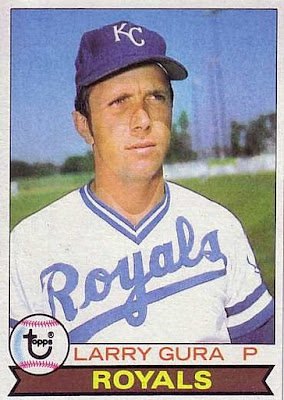 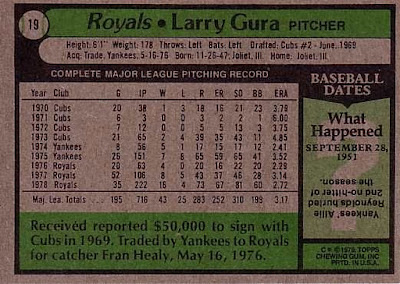 ﻿
Card Front: Larry is looking off into space. Hey cameraman, do you realize I'm a veteran major leaguer? I don't time to do a fancy photo shoot. Let's get this done so I can get in my running and make my afternoon tee time.

Card Back: Larry started his career with his hometown Cubs. I wonder if he was a White Sox or Cubs fan growing up. In 1969, $50,000 was probably a big signing bonus compared to nowadays. The Royals saw something﻿, making him a starter in 1978.

Six degrees or less to Seattle: While Larry was with the Yankees in 1974, he played with Rick Dempsey. As members of the Dodgers in 1990, Rick teamed with Dave Hansen. Dave was a Mariner in 2004 with one of the Aussie Mariners in Travis Blackley.

Blog Related to the Team: While there aren't many Royals blogs out there, I do know of one. Josh has a newer blog, but does great work at Royals and Randoms. Give him a read, and maybe make a trade with him.