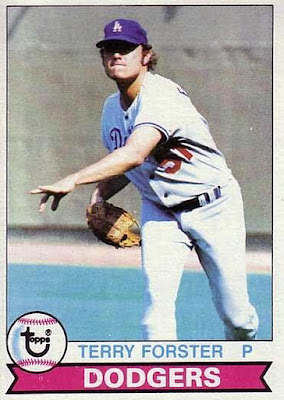 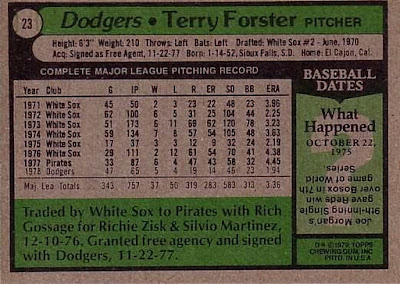 Card Front: Terry is in the follow through of either warm ups or playing catch with a teammate. The position of the fingers is hard to tell what he was throwing. ﻿I think from looking at the carpet in the background and the green wall, this was probably Philadelphia...

Card Back: Terry was an effective left handed reliever. High strikeouts, low walks but chances to get touched up. While Richie Zisk was good, I think the White Sox got hosed in the trade with the Pirates. I don't really remember Terry's days with the Dodgers. I more remember him as a Brave later on on WTBS.

Six degrees or less to Seattle: As a Dodger in the Championship season of 1981, Terry shared the bullpen with Ted Power. Ted would spend the last two months of 1993 with the just above .500 Seattle Mariners.

Blog related to the team: This is tough, does anybody know of any Dodger blogs??? I've heard there is some guy out there named Greg who runs Night Owl Cards. Can't say I've ever heard of it. Honestly though, he has one of the all-time greatest blogs out there. If you haven't read yesterday's post, it is an Instant Classic!!