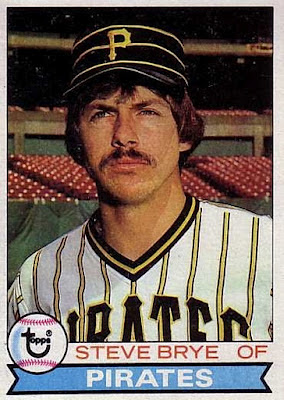 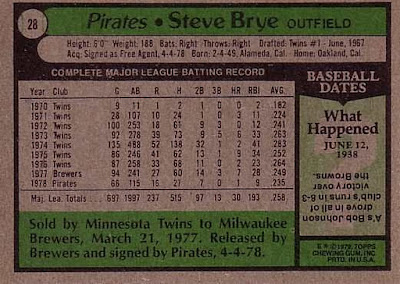 Card Front: We see Steve and his long 70's style hair. He is really rockin the moustache everybody had to have in those days. How could you not have the ﻿Pirates without the pillbox hats of the late 70's? The pinstripe jeresy is the first of many combinations for the Buccos. It funny that in November of '78 he was released, and signed with San Diego in 1979.

Card Back: Steve had spent his time in Minnesota. It still intrigues me that players were bought and sold so much easier back in the day. After a year in Milwaukee, he came to Pittsburgh. As you can see, he got a hit about 25% of the time. Not much power, but singles and doubles do the trick. Steve would spend '79 at AAA Hawaii and retire at age 30.

Six degrees or less to Seattle: In Steve's one season in Steel Town in 1978, he would play along side John Candelaria. John would move around a bit near his end. For the 1990 season, the Candy Man was a Toronto Blue Jay with Pat Borders. Pat would eventually come and go as a Mariner 3 times from 2001 through the 2005 season.

Blog related to the team: I know the Bucs have been down for many years. There should still be more Pirates fans out there because they have a long rich history. One man that isn't afraid to fly the Jolly Roger is the Real DFG. He is a fan of all teams Pittsburgh. I think he is in for a good ride on the Pirates bandwagon this year.

Thanks for the shout out of sorts. It's rough being a fan but the bright side is no one ever wants their Pirates cards. I think there is a bigger fan out there though over on the Pirates Treasure Room http://piratestreasureroom.blogspot.com/

They have an opportunity to do something big (although big is a relative term at PNC) as long as they seal up some of the holes in the pitching staff.