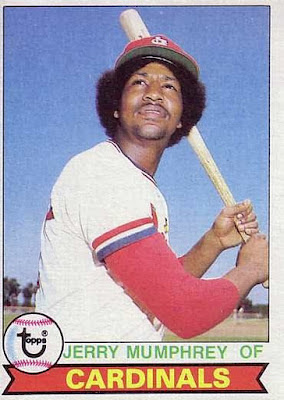 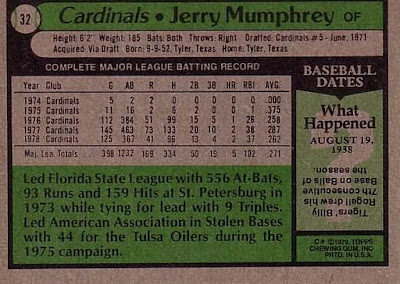 Card Front: A nice card from Florida ﻿in the spring. It must have been in the early part of camp since Jerry is sporting the long sleeves. The palm trees in the background give it a relaxing look. You can tell it is the 70's with the big afro, and high hat. Jerry seems to be waiting for a wild pitch from somewhere, or there is a hot chick floating in the sky.

Card Back: Jerry took the slow and steady route to the big leagues. After a 5th round pick in '71, it would take some time for a September call up in 1974. Obviously the Cards saw something in his '75 call up because he stuck around full time after that. It is nice to see that he never moved too far from home by being born, and still living in Tyler at the time.

Six degrees or less to Seattle: After 1979, Jerry would play in San Diego, New York, Houston, and Chicago until 1988. As a Cub in his final season, another 1988 Cub was Dave Martinez. Dave would move tot he south side of town and be part of the 1997 White Sox with Robin Ventura. Robin would find his way to be part of the 2003 Dodgers with Adrian Beltre. In 2005, Adrian would sign on as a Mariner and would play 5 seasons in Seattle.

Blog related to the team: There are many Cardinals fans out there. They should be loud and proud this year after winning their 11th World Series. One man that is an unabashed Cards fan is just down the road from me. Kerry(aka madding) is the man behind the legendary Cards on Cards. He has been at this for a long time, he has some great features including Airbrushed Fridays. Head over and read up, I'm sure he is still giddy from the championship!