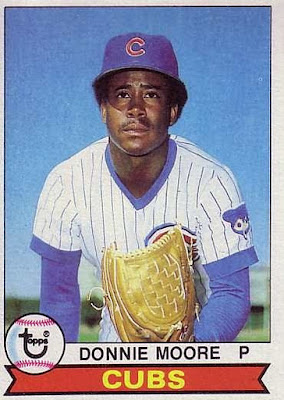 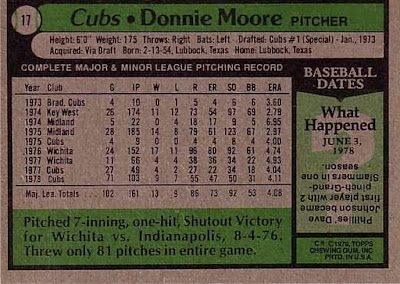 Card Front:﻿ Donnie is showing the classic posed picture for pitchers from spring training. Show the glove, lean forward, and look above the camera. This picture would be from the last years in Scottsdale before the Cubs would move back to Mesa and HoHoKam Park. Donnie is still known more as an Angel, and that one missed pitch in 1986.

Card Back: After being drafted in 1973, Donnie would make it quick to the Cubs in '75. A little more seasoning in the minors, and he was destined to stick in the Majors. Donnie would make it almost another 10 years in the big leagues. Dave Johnson with 2 pinch grand slams in a season, that is not easy to do.

Six degrees or less to Seattle: While Donnie has been gone since that fateful day in July of 1989,  he is linked to the 2009 Mariners and new Cub Ryan Rowland-Smith. Ryan and Jarrod Washburn shared the mound in Seattle. Jarrod was part of the Joyner part II time in Anaheim in 2001 with Wally Joyner. Wally spent his first go around with the Halos in 1988 before Donnie would leave the Angels.

Blog related to the team: As we all know there are tons of fans of the Lovable Losers. There are also several bloggers that love their Cubs. The first we give some love to names himself after the stadium. You should all know and read Wrigley Wax. If you ever want to know about Cubs cards, I think he has them all.