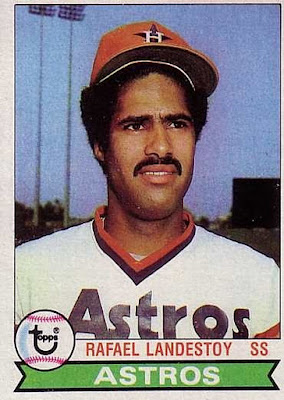 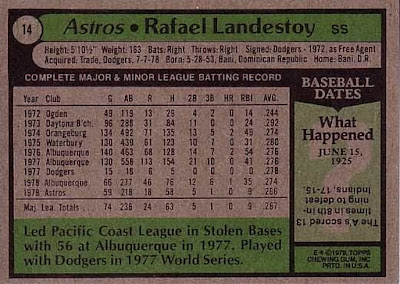 ﻿
﻿Card Front: Rafael showing off the great looking Astros uniforms of old. While he doesn't have the huge afro working, he wears his hat high on his head. I wonder what is off in the distance to his left that has him so intrigued?

Card Back: Rafael was a September call up for the Dodgers in '77 and saw the World Series. It seems that the Astros used him after acquiring him as a PTBNL in a trade in 1978. He would still play until the end of '84. You look at the June 15, 1925 game that in ended as a 17-15 game, and it sounds like a game from the mid 90's on steroids not a dead ball era game.

Six Degrees or less to Seattle: Rafael had a teammate in Houston in Jose Cruz. Jose's son was a Mariner in 1997 with Norm Charlton. Norm was a Cincinnati Red in 1988 with Eddie Milner. Eddie spent part of the 1981 season as a Red with Rafael.

Blog related to the team: One of the newer blogs to the world. I know that Trey of Rants, reviews, and fandom is an Astros fan. He does some great work and should try and look him up.

LOL He looks so worried! And with the hat so high (almost like a chef's hat), he might be saying "you don't like my souffle? Really?"

I think I remember him crossing himself between every pitch when he was at bat during the 1980 playoffs.