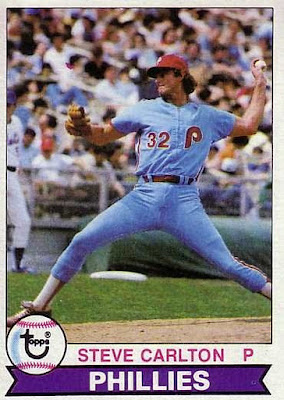 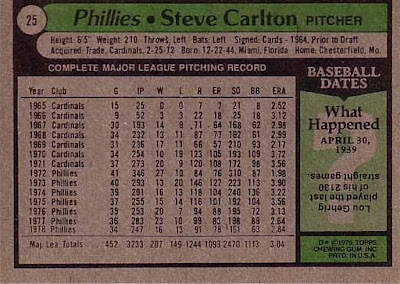 Card Front: ﻿Back to back Hall of Famers. We see "Lefty" working his magic on the mound at Shea Stadium. It looks like the change up is the pitch coming to the plate. How cool would it be to see the Phils go back to the powder blues on the road?

Card Back: Look at all those stats! That's just the first 14 years of a nice 24 year career. You have to wonder if the Cardinals kick themselves for trading Steve to the Phillies for Rick Wise?! Steve was one of the most dominant lefties of his day. Nice little note about another HOF'er in Lou Gehrig playing his last game in the streak.

Six degrees or less to Seattle: Five years after this card, Carlton would be a member of the 1984 Phillies with Kevin Gross. Five years later, Kevin would team up with Randy Johnson in Montreal as Expos in 1989. Later in that same year a young "Big Unit" would get traded to Seattle much to Mariner's fans dismay. Then we got to know him as he got pretty darn good.

Blog related to the team: There are an abundance of Phils fans on the blog world. One that's been around the block with the Phillies and does great custom work is the great Phungo. Is it just me or is that just a fun word to say? Check it out and show them some Brotherly Love--Philadelphia style.