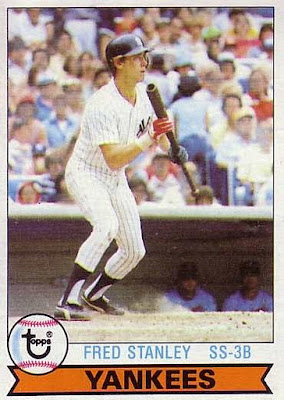 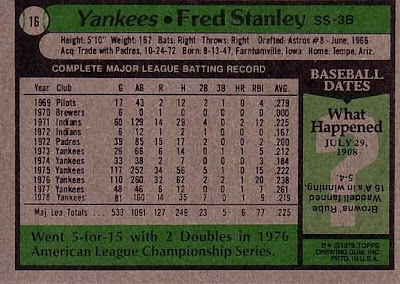 Card Front: Fred is at home in Yankee Stadium show an unusual bunting stance. I don't know if it was for fashion or he just lost a batting glove, but you have to love the two different colored gloves. It looks as though by the powder blue unis and the vague caps, they were playing the Twins in this game.

Card Back: Wow, 10 seasons in the majors and you only have 246 hits? No wonder the guy is shown bunting on the front. Not much power to speak of either, with only 34 extra base hits for a career. It seems the glove was more important than plate presence.

Six degrees or less to Seattle: Fred was a member of the original Seattle team with the Pilots in 1969. Fred can be linked to short time 1991 Mariner Pat Rice. Another Pat in Patrick Lennon was also on that '91 team. Mr. Lennon was a Blue Jay in 1998 with Tony Phillips. Tony spent Fred's last season in 1982 as members of the Oakland Athletics.

Blog related to the team: While there are quite a few Yankee centered blogs, I know who gets highlighted first. I'm sure most of you know AJ of The Lost Collector  by now. He does great work about a team I don't like as a Mariner fan. His redeeming quality is that he is a Tino Martinez fan, and Tino was a Mariner to start his Career.

And because I'm such a history/date geek... I had to see if I could figure out what game this is from. Unfortunately though, he bunted in two games vs the Twins in '78.

One time was a sacrifice to move brian Doyle to 2B. - http://www.baseball-reference.com/boxes/NYA/NYA197807302.shtml

BUT, this card might also be showing the start of a very unusual play -- a bunt single to the pitcher. That happened the day before his other bunt - http://www.baseball-reference.com/boxes/NYA/NYA197807290.shtml

This is, to my knowledge, the only Topps card that shares a number with the corresponding Burger King card.

Are any of the cards posted for trade i am trying to get the yankee cards from 75-79. If they are please email me at jrny920@gmail.com or if you know of anyone that has them and wants to trade or sell please let me know .,Thank you very much.