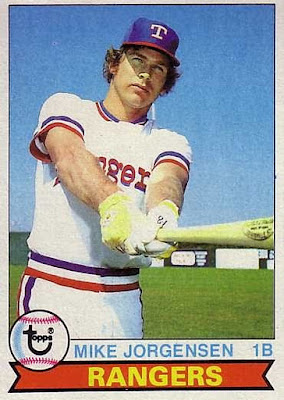 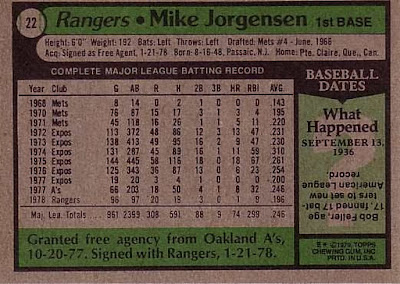 Card Front: Good thing Topps didn't make cards that required 3D glasses in '79 or that bat would hit you in the head. How can you not love the classic no belt snap pants of the '70s. Mike is a fashion maven with his yellow batting gloves, long hair, and mesh back trucker hat.

Card Back: Mike has been around by this time in his career. Being with his fourth team in 11 seasons. While obviously not a high average guy, he was serviceable. Pretty awesome that after six seasons with the Expos, he makes his home up in Canada. How about Bob Feller striking out 17 at age 17.

Six degrees or less to Seattle: Mike was a guy who got around. While playing as a Met in 1980, Mike worked with Juan Berenguer. Juan was a member of the Kansas City Royals in 1982 with Rico Rossy. Rico spent a very brief time in 1998 with Ken Cloude as they wore Mariners colors together. ﻿

Blog related to the team: I know there are plenty of fans of the two time defending AL Champions. One of the most well known and always writing bloggers is Brian of the great Play at the Plate. He is always writing informative posts, and always has his monthly contests. Even I won one once! Read the blog of one of the greats....

Coincidentially, Jorgensen's 1983 card is featured today over at the 1983 Topps blog.