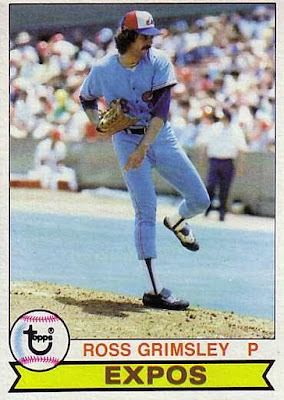 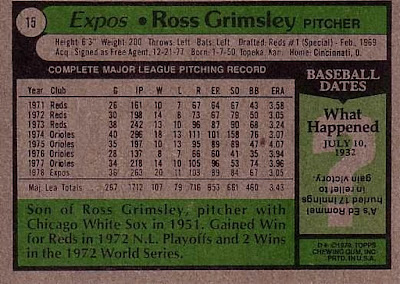 ﻿
Card Front: Ross is going through his warm up tosses to start the inning it seems. It looks as though it might be a day game at Riverfront in Cincinnati. How can you not love the tri-color hat and powder blue of the Expos? Looking near the bottom, where have stirrups gone in baseball?

Card Back: It looks like Ross has had much more success than dad, who only pitched one season in the majors. I like how Topps decided there wasn't enough room to spell out Ohio, or just Oh. for his home state now. People talk about limited innings and pitch counts nowadays, but in 1932 Ed Rommel went 17 innings in relief to get the win!

Six degrees or less to Seattle: Ross would play out his time with Montreal, and in 1982 as a member of the Baltimore Orioles he played with a kid named Cal Ripken. Cal would spend his last year in 2001 playing with John Parrish. John was a member very briefly with the 2007 version of the Mariners, and played along side Kenji Johjima.

Blog related to the team: While there aren't many Expos blogs or fans out there, I do know of one in Montreal Expos Baseball Cards. They do a card by card breakdown of past Expos sets. Does anybody know of any Nationals blogs to use for the Expos also?

Expos had one of the best uni's. Hey, if this is Riverfront (and I do think you're right), this is probably from the 2nd game of the May 7, 1978 doubleheader - http://www.baseball-reference.com/boxes/CIN/CIN197805072.shtml