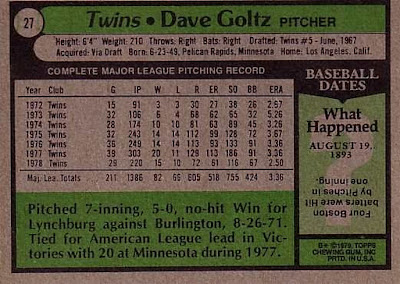 Card Front: Hey Mr. photographer, is this a serious enough look? I know many people hate the powder blue road uniforms that many teams wore in the 70's and 80's, but I like them. I wonder who the Twin is lurking in the background here at the Big A...

Card Back: Dave had spent his whole career with the hometown Twins through the 1979 season. In 1977 he would win 20 games for Minnesota. After the '79 season, Dave wou﻿ld move on to play for both teams in his new home in LA, playing for the Dodgers and the Angels.

Six degrees or less to Seattle: Dave would have many teammates in his time in the Twin Cities. In 1974 he would play with Rod Carew. Rod would team up with a young Devon White in the 1985 version of the California Angels. Devo would spend part of his 17th and final season with the Brewers. One of his Brewers teammates would be future Mariner Richie Sexson.

Blog related to the team: While I don't know of too many Tins blogs off the top of my head, one comes to mind. e rayhahn, rayhahn is run the by Rhubarb Runner. He is a die hard Twins fan that is always looking to expand his enormous Minnesota collection. Stop by and show him how much we all love the Twin Cities.

One of the greatest names for a hometown you'll ever find on the back of a baseball card. Yes, there really is a place in Minnesota called Pelican Rapids.

And it gets better -- the county Pelican Rapids is located in is called Otter Tail County.

Sorry, but this pic was definitely taken in Oakland.

His head is blocking the logo on the scoreboard, but you can see the Oakland iceplant, the fence & the top of the third deck with the dark green seats.

If you put the Rick Lanford card on the right of this one, you would see the left field & right field of Oakland. Look at the 4 light poles mounted on top of the scoreboards: 4 above the (Langford) scoreboard, 4 above the (Goltz) scoreboard. (there are no scoreboards or lightpoles like this @ "The Big A"-pre Rams)