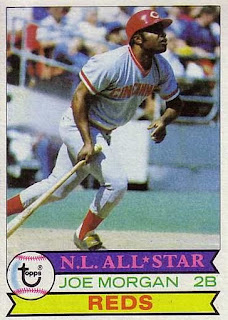 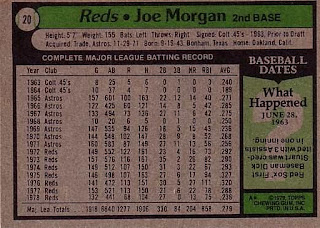 Card Front: The first card with the All Star ribbon. I liked these much more than the newer cards in the Update set. You have to love the old flapless batting helmet, those aren't legal anymore. Joe looks like a fireplug.

Card Back: Nothing like having 15 years of stats. There is so many numbers Topps doesn't even give any interesting factoids about Joe. It's not often you seen much reference to the Colt .45's anymore. It's too bad the Astros couldn't bring back that name. I'm sure it would be deemed violent and insensitive nowadays.

Six degrees or less to Seattle: Joe would move around alot in the final years of his career. During his year in Philadelphia in 1983, Joe played along side "the Sarge" Gary Matthews. Gary would come to Seattle in 1987 and play with catcher Bob Kearney.

Blog related to the team: I know there are many Reds fans out there. One of the most well known, and home of many group breaks is the great Nachos Grande. Not only does he love his Reds, but he is also a huge Barry Larkin collector.

As someone who began collecting in the late '70s, to me a player's All-Star designation belongs on his base card. I never got used to the post-1981 practice of having separate All-Star cards.