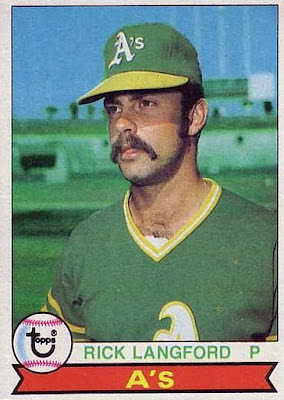 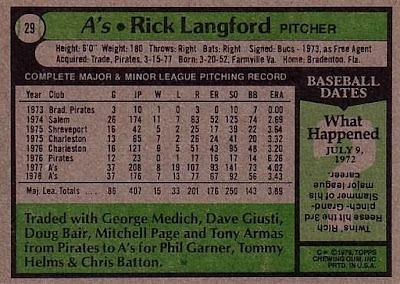 Card Front: I love the look of the old kelly green hats and pullover shirts of the Athletics. When you add in the green grass and background, it really starts to get washed out. Rick needs to trim down the 'stache, and take a weed wacker to that chest hair. It's good that the high hats of the day are long gone.

Card Back: It seems that the Pirates thought of Rick as a reliever. The A's felt he would make a better starter. While "Scrap﻿ Iron" Garner was a big name for the Pirates, it's hard to tell who really did better in a 6 for 3 player trade. How about Rich Reese with not only his 3rd grand slam, but they all were of the pinch hit variety.

Six degrees or less to Seattle: In Rick's final year in 1986, Rick was an Athletic with Jose Rijo. Jose would go from Oakland to play with Bruce Chen as Cincinnati Reds in 2002. Bruce and former Mariner Yuniesky Betancourt would team up in the 2009 version of the Kansas City Royals.

Blog related to the team: It is sad that there are very few blogs that are Oakland A's fans. When they are at the height of playing good, everybody loves them(early 1970's, mid 1980's), and these days no one claims them. One blogger that I know is with them through thick and thin is Mark of the Chronicles of Fuji. The San Jose Fuji may soon have the A's playing in his town if they move like owners Lew Wolff and John Fisher have their way and move south.

I totally remember Rick Langford in the early 80's. He pitched during the Mike Norris, Steve McCatty and Matt Keough era.

Lol... it's funny that you mention some of our so-called fans. It's probably that way for a lot of teams. Here in the Bay Area,the SF Giants fan base quadrupled in size after they won the World Series.

Hopefully the A's will one day bounce back. Until then... the die hard fans will remain loyal.

BTW... love the 6 degrees or less to Seattle section.