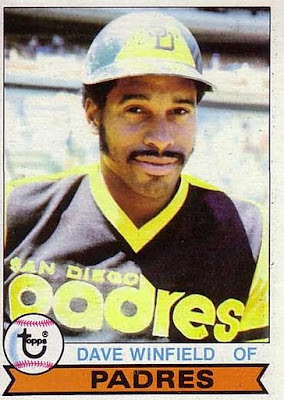 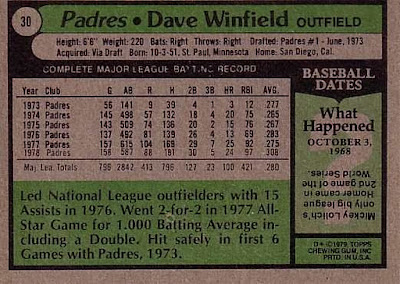 Card Front: A nice close up of an always smiling Dave. I know that most people want to always make fun of the Padres uniforms from the 70's, but I liked this look. Dave wore the old flapless helmet, which makes me wonder who was last player allowed to wear one. I think the Padres were one of the only teams to have the city and team both on the front of their jerseys.
Card Back: The beginnings of the start of a long, HOF career. Nothing like going 2 for 2 in the 1977 All Star game. Dave would get to be the Padres representative for the '78 game in San Diego. Getting drafted in '73 and getting into 56 games is no easy feat. One hit per game is a darn good average.
Six degrees or less to Seattle: Dave would spend plenty of time hurting the Mariners as a hitter in the AL. As a member of these 1979 Padres, Dave would play with Jay Johnstone. In the year before in 1978, Jay would team with Todd Cruz as 1978 Philadelphia Phillies. Todd would play Shortstop as a Mariner in 1982 and '83 before heading off to Baltimore.
Blog related to the team: There are some classic Padres blogs out there. I had to flip a coin to decide to who got the honor of the first blog push. The winner go to Rod of Padrographs. He is a wealth of knowledge on many subjects including baseball and books. I don't think there are many autographs of Padres players or execs he doesn't have. Give him a read, it's Swinging Friar-alicious!!
Next Card: #31 Tom House, Mariners
Posted by Mariner1 at 6:36 AM

Thanks for the info Brandon. I knew that guys were grandfathered in before a certain time. I couldn't remember who the last one was, but I knew somebody had the answer.