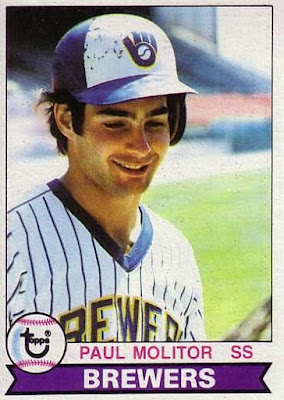 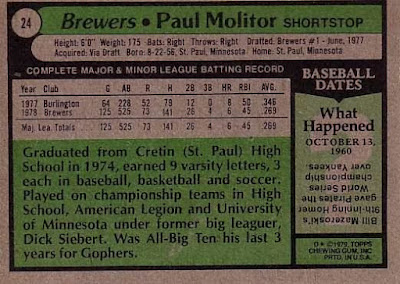 Card Front: A very young picture of a future Hall of Famer. Who knew he was a SS, I remember some time at 3B but mostly DH. While this isn't considered his RC, it is his first solo card. You have to love the pinstripes and the white front of the old Brewers unis. Is County Stadium still standing or did it get torn down?

Card Back: Topps doesn't tell us he was originally drafted by the Card in the 28th round in 1974. The 3 years at Minnesota would raise him to the 3rd pick in 1977 and a summer with the Burlington Bees in A ball. That was all it took for Paul to start his long career. How about the walk off homer by Maz in 1960. ﻿

Six degrees or less to Seattle: While Paul was a Mariner killer in his career, he is linked to newer Mariners too. As Paul was winding down with his hometown Twins in 1998, he would teach to former Mariner farmhand David Ortiz. In 2007 when the Sox won their second championship, Papi reamed with Wily Mo Pena. Last year, Wily Mo spent a short stay in the Emerald City.

Blog related to the team: I think you all know who the first Brewers link goes to. One of the big dogs of blogging is Bill of Thorzul Will Rule. He has posts that will make you laugh, some that will teach, and plenty of great group breaks. He should be on the blogger's Rushmore with Night Owl, and DayF, Big Daddy J, and Play at the Plate.

How much better would this card look with a rookie cup on it? The one big disappointment I have with the set is that it began the seven year run of no cups.

That being said it is still a cool card, especially with the dirt on the helmet and the old school Brewers logo (which is still one of my favorites ever).

This has always been my favorite Molitor card. he looks cool, his helmet looks like he plays hard, he's smiling, the sun is shining, and that awesome classic Brewers logo.... just makes you feel like baseball should be played right now.

Topps position designations were pretty sloppy in those days. Molitor did play some SS in '78 but played three tiems as many games at 2B.

The front of this card is perfect except for one thing.. the pinstripes. The pose, the logo, the stadium, everything else is classic.