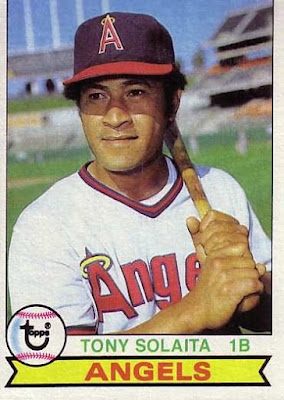 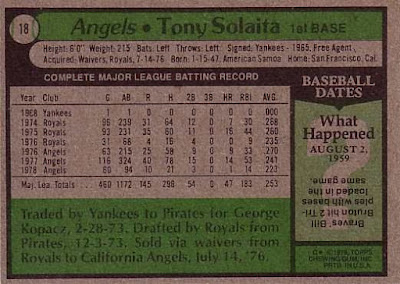 Card Front: Tony making his pose during the 1978 season at the Big A in Anaheim. It is funny to see Tony as an Angel on a 1979 card since he was nowhere near the Angels for the '79 season having been sold to the Expos in the off season. Tony would be a trade deadline guy, going the Blue Jays in the middle of '79. Nice work to see all of Canada in one season.

Card Back: The one token AB for the Yankees stands out, and then nearly 6 seasons before making it back to the big leagues. Three years in KC, three in Anaheim, 1979 would see Tony in both Canadian cities in Montreal and Toronto. He would spend the next four seasons in Japan. He is the only player to ever be born in American Samoa to play in the Majors. He would tragically be murdered in his home on February 10, 1990 at the age of 43 over a land dispute.

Six degrees or less to Seattle: While splitting time in Canada in '79, Tony teamed up with Larry Parrish in Montreal in 1979. Larry would be on the 1988 Texas Rangers with future 1B Pete O'Brien. Pete would also spend 1990 with short time guy Gary Eave in Seattle.

Blog related to the team: There aren't too many Angel blogs out there. One of the best is The Angels, in Order. Tom does an excellent job of chronicaling the history of the Halos, and showing off many different historical things Angel related. If you have extra Angels cards, hit him up because he does awesome trades too.

That's in Oakland, not Anaheim.