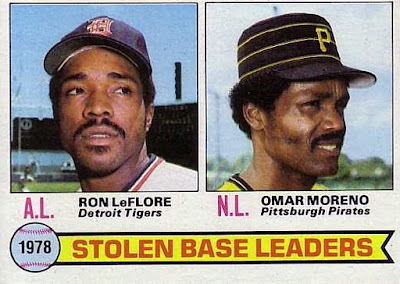 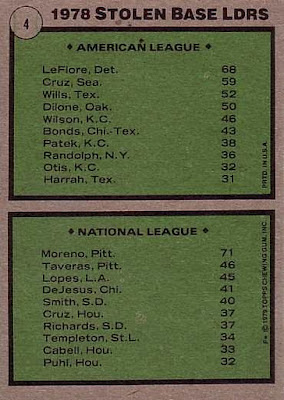 Card Front: Remember the days in the 70's and 80's when stolen base numbers were higher than home run numbers? Ron LeFlore was a speed demon for the Tigers, pictured here from Yankee Stadium. Omar would lead the NL in '78, '79, and just miss by one in 1980 stealing 96 while Ron would lead the NL with 97 as an Expo in 1980.

Card Back: ﻿The disparity in the numbers of the top 10 is amazing. Both #1 guys had more than double the #10 player. While there is only one guy in both leagues that is in the Hall, there are still some recognizable names top to bottom in both leagues. While the AL race was semi close, Omar blew the doors off teammate Frank Taveras by 25 bags.

Six degrees or less to Seattle: Obviously Julio Cruz was a Mariner in 1978. Ron can be traced to a Mariner of a few years ago in Randy Messenger. Ron spent 1980 in Montreal with Bill Almon, who spent 1987 it Pittsburgh with Barry Bonds, and Barry played with Randy in 2007 in San Francisco. Randy spent parts of 2008 and 2009 in Seattle. Omar can also be tied to the Mariners. Willie Randolph was his teammate in Pittsburgh in 1975, Willie would spend the 1990 season with the Dodgers teaming with Dave Hansen, and Dave spent part of the 2005 season with George Sherrill in Seattle, and George is back with the team in 2012 for his second go around.

I miss the times when the stolen base was an offensive weapon.