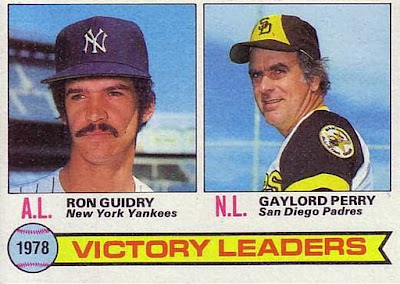 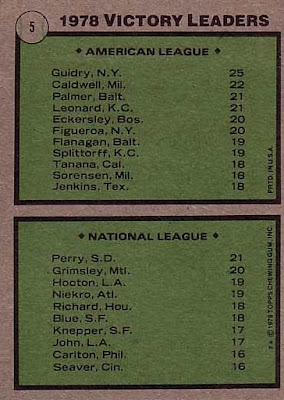 Card Front: The Yankees make their first appearance in the 1979 set with the "Louisiana Lightning" in Ron Guidry. Nice also to see an appearance by the brown and yellow of the Padres. Perry would make many stop in his career including Seattle for his 300th win.

Card Back: Look at the names on this bad boy. Lots of stars from both leagues, and a few that who would ask who by looking at the last name. Four out of the ten in the NL are in the Hall, and three for the AL are represented. ﻿Even the bottom 5 in each league would be welcome on just about any roster today.

Six degrees or less to Seattle: Obviously Gaylord would spend some time in Seattle. How about Guidry to the Mariners? Ron would play with Tommy John in New York in 1980, Tommy would team with future Mariner Mike Blowers in 1989 with the Yankees. Also Angel Frank Tanana played with Bill Bean in Detroit in 1988, Bill would team up with Rich Rodriguez in San Diego in '93, and play alongside Chone Figgins in Anaheim in 2003. Another is Phil Niekro who was with Jeff Burroughs in Atlanta in '79, Jeff played with Mariner broadcaster Bill Krueger in Oakland in 1983, and Bill was part of the magical 1995 run along with Arqumediez Pozo. Lastly, Vida Blue spent 1970 in Oakland with Diego Segui. Diego was the only player to be with both the Pilots and Mariners, throwing the first pitch in Mariners history.

When I think of Guidry, I often think of his 9/4/83 start in the Kingdome. He was beating Seattle the whole game, 'til Steve Henderson smacked a 2-run shot with 2 outs in the bottom of the 9th. Being a Yankee fan & lovin' Guidry, I was shocked. The Yanks still pulled out the win by 1 run, but from then on, the Mariners always scared me as a kid LOL