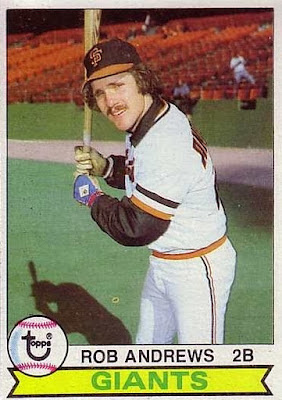 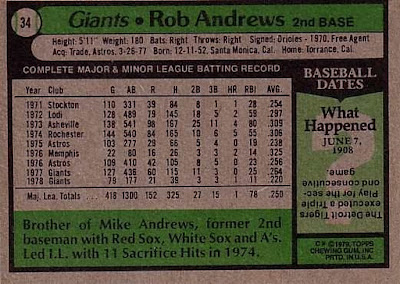 Card Front: Here is Rob sporting his best pose at Candlestick. You have to dig the nylon jacket WITH collar underneath his jersey. What is with the blue and red batting glove? Did he steal that from some Dodger player at 2nd base? Boy oh boy the Astroturf sure is green today dear....

Card Back: Rob decided to take the slow road to get the big leagues. After being drafted in 1970, it would take 4 full years in the minors to make the majors. Rob spent more games in the minors in his career, than in the majors. The Giants would release Rob after the '79 season, and he tried to make the Mets in 1980. He didn't last and he was done.

Six degrees or less to Seattle: Since Rob had very little time in the bigs, this took work. Rob played with Jim Dwyer as members of the 1978 Giants. Earlier in 1978, Jim was a St. Louis Cardinal with Ken Oberkfell. Ken would eventually be a Giant in 1989 along with Russ Swan. Russ was a Mariner in the early 90's.

Blog related to the team:﻿ I didn't officially give give him due credit the first time. There a blog that was a little dormant until recently that talked all about Giants cards and players. He is back, and better than ever. I think everybody knows of Matt of A Giant Blog. He is a wealth of knowledge about the Giants, and baseball in the Phoenix area. Check out his good stuff.

i just started scrolling through this - great job! and your cards seem to be in such good shape! how did you put the set together? and thanks for visiting my blog at http://bonus-cantos.blogspot.com/

wow -- he led the International League in sacrifice hits one year! what a highlight!