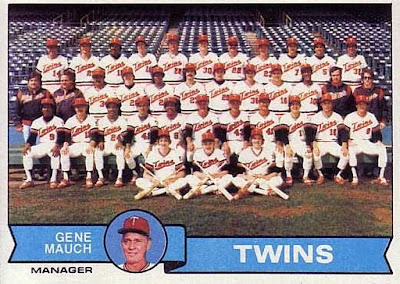 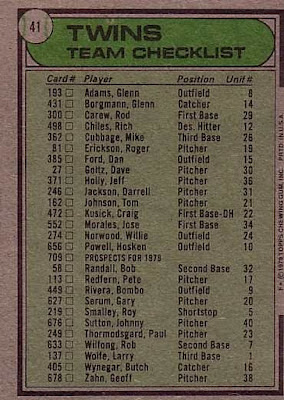 Card Front: How awesome were these team pics back in the day. How cool would it have been to be one of bat boys and know you are forever immortalized on cardboard? Even the trainers and other staff were able to get in the picture. I always liked the little picture of the manager at the bottom. I miss these cards. After all the years in the Metrodome, I forgot that they used to play at Metropolitan Stadium, outside!

Card Back: How awesome were these? How many times did we all check off the cards we had on the back? I love it, card #, name, position, and uniform #. Remember this was the best way to get info on other teams before the Internet. Yes kids, there was a time when we didn't have Internet, cell phones, and remote controls for the TV.

Six Degrees or less to Seattle: The only player to tie to the Mariners is OF Willie Norwood. Willie was traded to Seattle in December of 1980. He would be released in the end of March of 1981 at the end of Spring Training. Donruss would show him as a Mariner in a Twins uniform in their 1981 set(see below). Willie would end his career playing for the Reynosa Broncos of the Mexican League in 1981 and '82.

Blog related to the team: While it is hard to find Twins collectors, there are other Twins blogs out there. One that I found is k-bro's baseball blog. It seems to have good info on the Twinkies. Seeing the back of the card, I had the same thoughts you expressed in the comments. But it would always seem like you were missing a few cards, and would be left wondering what those cards looked like....

During the 1978 season, the Twins used 17 position players. This group is pretty straightforward. The only one of the seventeen who didn't get a card from Topps in '79 was Dave Edwards, who appeared in 15 games as a September call-up.

During the 1978 season, the Twins used 16 pitchers. Ten of these players got cards from Topps in 1979. The Twins' pitching staff this year was more complicated than their position players. Their closer appeared in 54 games. Four additional pitchers who were primarily or exclusively starters appeared in between 29 and 37 games. No other pitcher appeared in more than 20. So there was a large collection of pitchers who hadn't played all that much (at least in the majors), and Topps had to sort out who to include and who not to include. Of the eleven pitchers who appeared in 20 or fewer games, six got cards and five didn't.

All five of pitchers in the above group who didn't get cards were 27 or older, and four of the five could be fairly characterized as "retreads" (players who had previously made it to the majors, but hadn't stuck). Only one of these five players appears to have been on the Twins' major league roster at the end of the season. It was probably easy for Topps to cut these guys, and this call turned out to be right. None of the five would appear in the majors in 1979 or in any subsequent season.

Conversely, the pitchers in the 20 games or fewer group who got cards were either young players who seemed to potentially have more of a future (Darrell Jackson, Johnny Sutton, Jeff Holly) and/or players whose games played appear to have been limited due to injury (Tom Johnson, Paul Thormodsgard, Pete Redfern). All of these pitchers except Johnson were 25 or younger in 1978, and even Johnson was only 27.

The most notable omission is Mike Marshall. Marshall is clearly an anomaly. The team's closer, he signed with the team in May and appeared in 54 games, throwing 99 innings and going 10-12 with 21 saves. It is my understanding that Marshall's absence from the 1979 set was not due to Topps simply deciding not to include him, but was related to some kind of ongoing dispute between Marshall and Topps. After going 10-15 with 32 saves in 1979, Marshall was absent from the Topps set again in 1980, for the same reason.

Two more points of trivia: 1) The Twins do not appear to have made a single transaction during the 1978 season in which they released or traded away a player who was on their major league roster at the time. Everyone who played for the Twins in 1978 looks like they were still with the organization at the end of the season, though some were in the minors. Of all the players who didn't get cards, all but one either played for the Twins' organization in 1979 or has a transaction documented by baseball-reference.com showing them leaving the Twins after the end of the 1978 season. (For the one remaining player, Roric Harrison, there seems to be no reason to think he wasn't still with the organization at the end of the season, but I can't say that he was with complete certainty.) 2) None of the three players who appeared on the Twins Prospects card in the 1979 Topps set appeared in any games at the major league level in 1978.