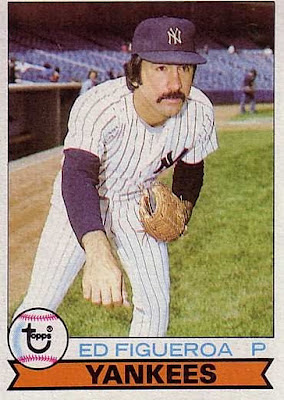 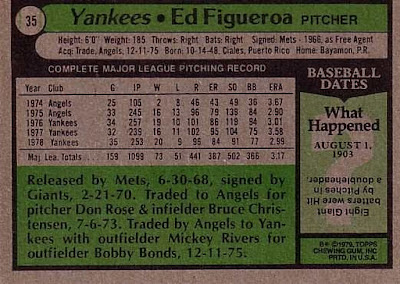 Card Front: Ed is making it look like he is doing his warm ups at Yankee Stadium. I doubt it since no one else is around. Are those reporters or who are those people lurking around in the background? It seems like Ed wanted to make sure to give the camera his game face.

Card Back: It is hard to comprehend what the Mets and Giants missed in this guy. 5 1/2 years in the minors and two teams before you make the majors with your third team. The Yankees must have seen something to get two good players for the always traveling Bobby Bonds. It seems that the Giants opponent on that August day must not have liked them with 8 hit batters.

Six degrees or less to Seattle: In the same year as this card, Ed was a 1979 Yankee with a young Dave Righetti. Dave would eventually take his services to San Francisco. In 1992, Rags would team up with another Dave in Dave Burba. Burba had just left the Mariners after spending 1990 and '91 in the Emerald City.

Blog related to the team: ﻿There is a newer blog out there that has another Yankee fan writing it. You haven't found it yet, head on over to Ryan's Pitch. While Ryan is still new to the blog world, I have enjoyed reading his stuff so far. Tell him I sent you form back in time in 1979.