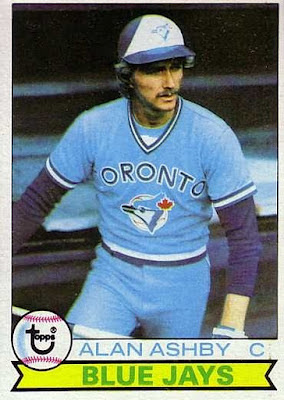 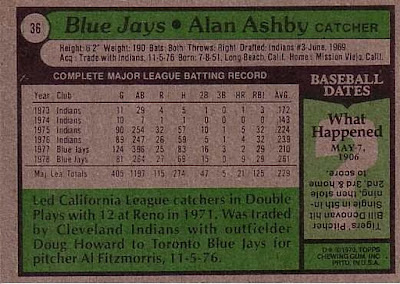 Card Front: Alan is in the﻿ dugout of an opposing ballpark. You can't really tell which one though. I think the look of the road blues with the classic Jays logo is great. Alan is looking so hip with his 'stache and his feathered hairdo. It is funny that this set has him as a Jay. He was traded to Houston in November of 1978.

Card Back: It took Alan a while to make it to the Indians after getting drafted in '69. Late call ups in '73 and '74 would lead to shared time in Cleveland in 1975 and '76. It seems the Blue Jays thought they needed another catcher for their first season, trading for Alan in the off season. He was their guy in that first season, but would split time with Rick Cerone behind the dish. Then it was off to Houston to finish his career.

Six degrees or less to Seattle:  While Alan was making his name as an Astro in 1980, he would play with Denny Walling. Denny would be a long time Astro, teaming with Joe Boever in the 1992 version of the Astros. The next year in 1993, would see Joe move to Oakland and be an Athletic with Brent Gates. Brent would see time at all 4 infield positions and a game in left field as a Mariner in 1997.

Blog related to the team: There are a few fans of the only team left north of the border. One guy that's been around for a while doesn't hide his love for the Jays. Ted over at Crinkly Wrappers does some great work. I've traded with him before, and he is more than generous. Go on over and give him some Toronto Love!! 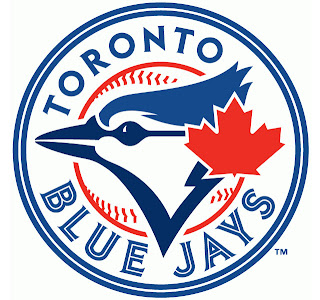 "It is funny that this set has him as a Jay. He was traded to Houston in November of 1978."

By this time, it's my impression that Topps had completely given up on updating players' teams to reflect offseason transactions. Everyone was simply shown with whatever team they had finished the previous season with.