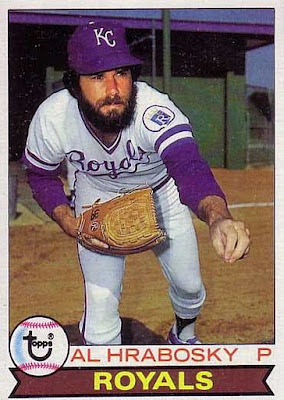 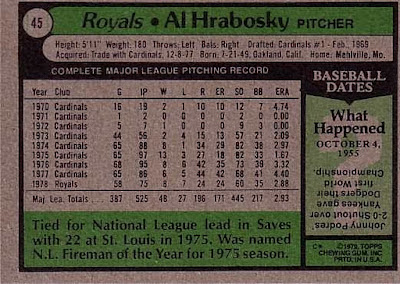 ﻿
Card Front: It is funny how Al doesn't look so scary in this year's card. When Al would sport the whole beard, it made  him look more nice. The times that he had the Fu Manchu was when he was a bad mutha. One thing that makes me happy is that except for the pullover shirt and the the beltless snap waist pants, the Royals have stayed pretty true to the uniforms.

Card Back: For a closer, Al would factor into a lot of decisions by getting the wins and losses. In his career, he would win 64 games and only have 97 saves. I think the cross state Royals got the better of the Cardinals in the two for one trade that brought Al to KC. Dodgers fans will love the blurb about Johnny Podres helping Da Bums to their first World Series win in 1955.

Six degrees or less to Seattle: We all know Al did his time against the M's as a Royal. The Mad Hungarian would finish his career in Atlanta. As a member of those 1982 Braves, Al was teammates with Rick Mahler. Rick would eventually be a member of the 1990 Cincinnati Reds with Chris Hammond. Chris would move south and be part of the 1998 Florida Marlins. Another player on that '98 team was Ryan Jackson, and Ryan spent 32 games on the Mariners 1999 roster.

Blog related to the team: It is amazing how many die hard fans there are of the Royals. It is understandable with their history. One guy that sounds much like me is Matt. He started in 1980 collecting cards on a small budget. His blog is about his 26 Cent Summer. He does many good things and is very proud to see the All Stars come back to Kaufman Stadium this year.