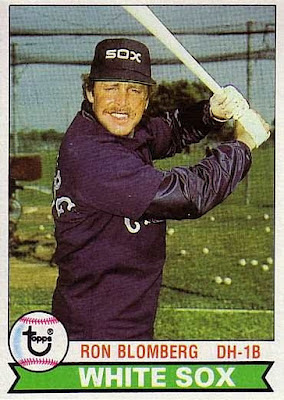 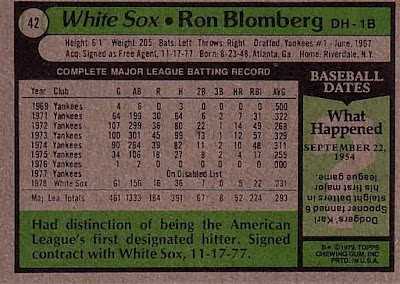 ﻿Card Front: Here is Ron doing his best to look like a menacing hitter. It looks as though it was a nice sunny day in Sarasota, FL during the spring. I assume it was a little chilly since Ron's sporting the nylon windbreaker. How cool would it be to see the Sox go back to these old navy blue threads?

Card Back: As you can see, Ron didn't have the making of a great hitter. While his averages were high, the number of at bats are not very high. I like the historical fact Ron was the American League's first DH back in 1973. I think that Brooklyn's Karl Spooner started pretty well fanning 6 straight in his first MLB start. This card was Ron's last, since he was released on March 30 before the 1979 season.

Six degrees or less to Seattle: Most all of Ron's teammates would be Yankees. As part of the 1974 Yankees, Ron played with Rick Dempsey. Rick would be one the catchers to catch John Wetteland as part of the 1990 Dodgers. John would make his name and spend time on the same mound as Mike Gardiner for the 1993 Montreal Expos. Mike broke into the Majors for 5 games as a part of the 1990 Mariners team.

Blog related to the team: I think we all know the White Sox. One of the more well known teams. They never get the love that their city mates from the north get, but they have their devoted fans. One of them that was been blogging for a long time is Steve of White Sox Cards. He always has a card of the day, and I'm really looking forward to his season pass cards for 2012 since last year's were pretty cool.