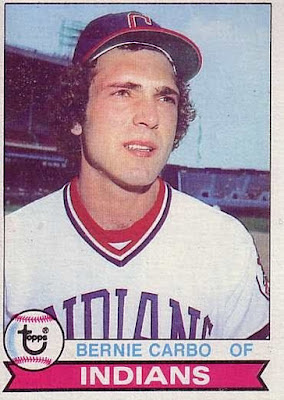 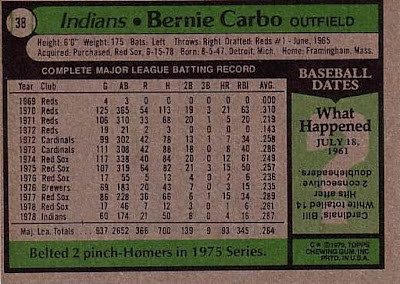 Card Front: A nice tight close up of Bernie in Cleveland's old Municipal Stadium. It's hard to tell what Bernie is staring off at. The shot is so close in, it doesn't leave much in details. You can see the light standard against the nice blue sky.
Card Back: As you can see Bernie had been around for awhile. While he had bounced from team to team, the final years of his career were filled with more travel. In November of 1978 he was released by the Indians. He would play in 52 games in '79 for the Cards. The next year would see 14 for the Cards, and 7 for the Pirates. He tried Detroit in 1981 but was forced out of the game.
Six degrees or less to Seattle: Bernie had many teammates in all of his travels. As a member of the 1977 Boston Red Sox, Bernie would team with Fergie Jenkins. Earlier in Fergie's career, he was a member of the 1972 Chicago Cubs. Also on that '72 team was Joe Decker. Joe was 0-1 in 9 games for the 1979 Mariners. Joe was here and gone in the blink of an eye.
Blog related to the team: It's fun to try and find new blogs for teams. Some have many followers, some teams have very few, and some like teams that weren't around in 1979. One blogger that I found that was here for the '79 Tribe, the Baseball dad of All Tribe Baseball. I enjoy to read his work, and he is a dedicated Indians fan through and through.
Next Card: #39 Dale Murphy, Braves
Posted by Mariner1 at 7:15 AM