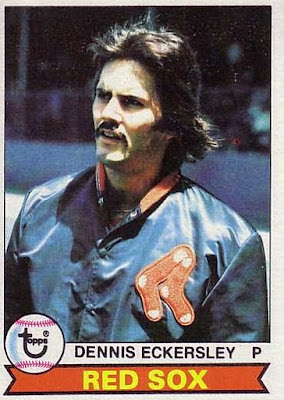 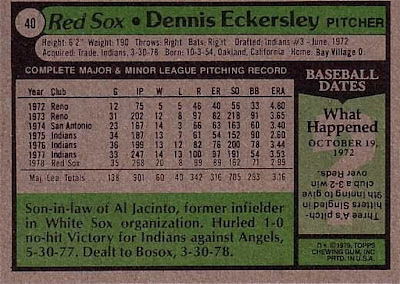 Card Front: Here is Dennis in with his flowing parted down the middle hair. Between that and the little moustache going, that was the fashion in the 70's. I remember when we all wanted a satin jacket like that back in the day. I don't think any of us would be caught dead in one nowadays.

Card Back: The early makings of a Hall of Fame career. While we know that Cleveland didn't have very good teams back in those days, they gave up what would be a 20 game winner in his first year in Beantown. It seems like the Sox gave up alot but got the better end of the deal. I find it odd that Topps can't spell out Ohio for his home.

Six degrees or less to Seattle: Dennis played with many teams and many guys in all his years. While a member of the 1980 Red Sox, Dennis shared the mound with Steve Renko. Earlier in in Steve's career he was a teammate of Richie Zisk's as part of the 1977 Chicago White Sox. Richie would spend his final three years with the Mariners as their primary DH from 1981 to 1983.

Blog related to the team: We all know there are about a million Red Sox collectors. Most of them have blogs too. One of them is a bloody good chap to read, and to trade with too. If you haven't done it, head over to read ﻿Jack's work at Pursuit of Red Sox. It may cost a little extra to send a trade across the pond, but he's definitely worth it!

The Indians had to trade either Eck or Rick Manning. The two had become good friends and roommates. But Manning had gotten injured and stayed home while Eck was on the road. Unfortunately, Eck's wife also stayed behind, and the inevitable happened. The Indians had no choice but to seperate the two.

I'd wear one of those satin jackets if it were an SF Giants one.