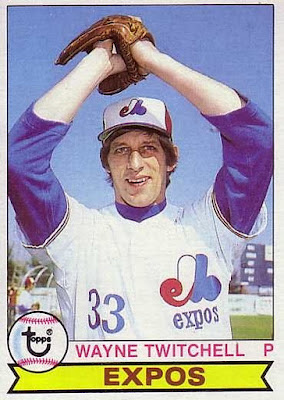 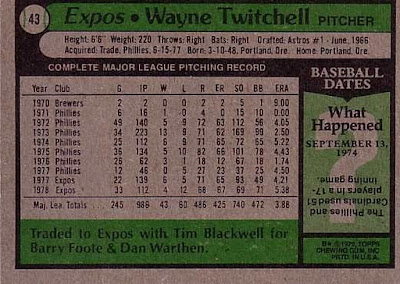 Card Front: It is fun to see Wayne with a big grin on his face. I wonder if he's just happy because it's spring time or he knew he was in Daytona Beach. I like the player under his right arm and the batting cage on the warning track. At least they gave him a ball in his hand for the staged photo.

Card Back: Wayne was a quick call up in 1970, and it earned him a trip to the Phillies. Eventually he would head north of the border to Montreal. This card would show him as an Expo, but he would be released in February, and sign with the Mets in April. In August he would be purchased and come close to his home in Portland by coming to the Mariners. Wayne would not pitch again in the majors after the 1979 season.

Six degrees or less to Seattle: We don't have to go any degrees to get Wayne to Seattle since he was a quick Mariner. Another player that was a quick Mariner that You can't find any cards or photos was Luis "Puchy" Delgado. Luis was a September guy for the original M's in 1977 seeing action in 3 games. Puchy would spend the next two years back in the minors before retiring after 1979.

Blog related to the team: Is there any Expos or Nationals collectors out there?? The only other card blog I know of that does the team, hasn't posted anything new in almost a year and a half. The blog for NatsTown ﻿ is still up, but needs some new content. With the rich, colorful history of the the 1(2) teams I'm surprised more fans don't write about them.