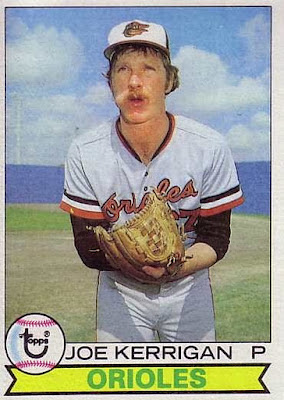 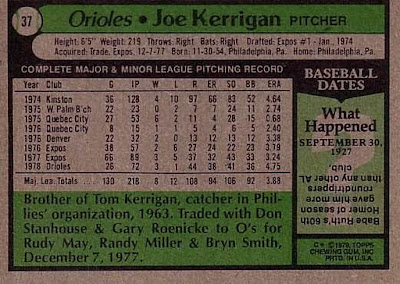 Card Front: It seems as though it is a warm day in Florida. Joe is sweaty and the grass isn't very green. I for years have tried to figure out if that is his tongue in his cheek or just the weirdest looking chaw I've ever seen. His hat doesn't make much sense either with it's look of two birds on it.

Card Back: From the facts of Joe's brother Tom playing for the hometown Phillies to the players in his trade, there info galore on this card. I think the Orioles got the better end of the deal by looking at the players that came to Charm City. How amazing is it that Babe Ruth's 60th HR ﻿in 1927 was more than any AL teams total!

Six degrees or less to Seattle: Back in Joe's rookie season in 1976, the Olympics came to Montreal. As an Expo that year, Joe would play with Jim Lyttle. Earlier in Jim's career he was a Yankee in 1970. On that '70 team with Jim was Mike Kekich. Mike was an original Mariner in 1977, which was also his last season in the big leagues.

Blog related to the team: There are many bloggers out there that love the Birds. I can't think of one that I don't like their blogs. One that I have read for a long time and am very envious of is Ryan of The Great Orioles Autograph Project. He has just completed obtaining autos of everyone to wear an Orioles uniform. Go give him a look and tell him hello from the year 1979.