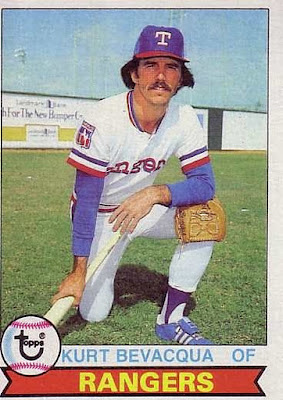 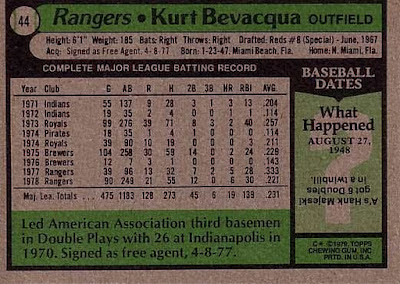 Card Front: The only thing I find interesting about this one is the Rangers whites. I'm amused by the on one knee with a bat and glove pose like a 7 year old in Little League. It is strange that they list him as an OF when he only was out there for 14 games in his 2 years in Texas. Kurt was an infielder. He is most famous for being part of Tommy Lasorda's rant in 1982(see below).

Card Back: As you can see from the stats on the back, no one really took a big liking to Kurt. He would bounce around quite a bit, but always seeming to end up back in San Diego in his last six seasons. What Topps fails to tell us is that Kurt was traded to San Diego in October of 1978 and never saw the Rangers in the 1979 season.

Six degrees or less to Seattle: Kurt was supposed to be an original Mariner in 1977. He was purchased in October of 1976 from Milwaukee, but never made it out of camp in 1977 being released by Seattle in late March of 1977. Nearly 30 years later there would be another very short time Mariner by the name of T.J. Bohn. T.J. only lasted for 14 games with Seattle before being shipped out of town.

Blog related to the team: There are many Rangers fans. They have much to be proud of having been tot the World Series the last two years. One man that loves his Rangers and doesn't gloat about their success is Spiff. Spiff runs the great Texas Rangers Cards that has been a round for a long time. Read up on a team that has had many good guys in their time.

http://youtu.be/fzjWQF1oP2M
I don't know why I can't get the video to embed, but click on it. It's funny, but definitely NSFW!!
Posted by Mariner1 at 8:24 AM

Cards That Never Were said...

Classic. I've always loved that rant. It used to be that every time I saw a Bevacqua card I thought of the bubble gum card. But now all I can think of is Lasorda.

It's not embedding because you're using the wrong link. The word "embed" ( and also "iframe") needs to be in the link.

If you clicked the "Share" button to the YouTube video, hitting the "Embed" button will give you the correct info to embed.

Hey, thanks for the shoutout. Really enjoying reading this blog.