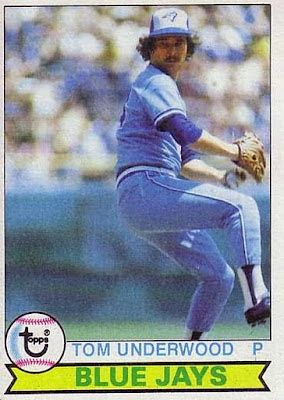 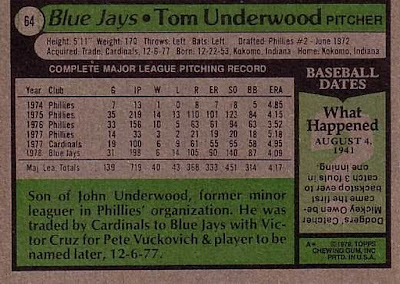 Card Front: I'm not too sure who was doing quality control when it came to this card. How could you think putting a player that far off center looks fine? The other distracting thing is all the blues in the background on the lower half of the card. Maybe a picture from North of the border in the home whites would have been better. I like that the Jays have gone back to near the original logo this year.

Card Back: Tom had a good first full year in 1975 going one game above .500, but it was all ﻿downhill from there. I guess the Jays saw something to make a trade to bring Tom in. Tom would leave Toronto after the '79 season moving to New York and would change a few more times through the 1984 season. Who knew there was any other Kokomo besides the one the Beach Boys sang about? Were they sing about Indiana???

Six degrees or less to Seattle: After 1979 Tom would move down to be part of the Yankees. One of his teammates in the Bronx in 1981 was George Frazier. George would move to the North side of Chicago to be on the 1984 squad of Cubbies. Another one of those 1984 Cubs was "Sarge" Gary Matthews. Gary would spend his last season in 1987 as the DH for the Mariners.

Blog related to the team: There are slowly becoming more fans of the Blue Jays in the card blogging world. One Jays fan that is out there is on a strict diet.. er budget. Some of you may have heard of Robert. He is a man that might some how be a long lost brother. He is also a hockey fan like me. He is working on a Lifetime Jays Project similar to my Super Set of Mariners. I like a man that has principles, and he sticks to his $30 a week habit. Check him out and maybe send some Canadian bird love his way.

That had to be done on purpose. A jealous coeditor? A p.o.'d intern?

Maybe the player was so fast in his delivery that you were lucky to get even one shot of it?