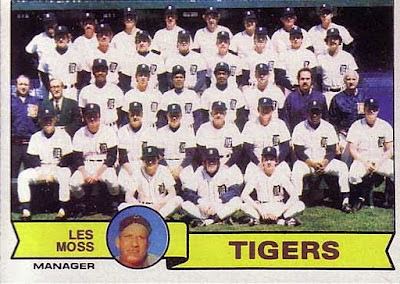 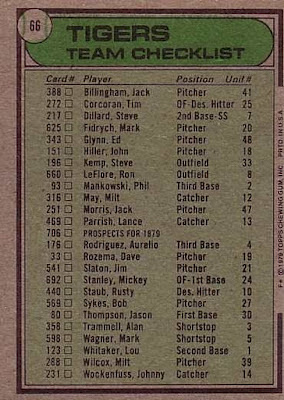 Card Front: Here are your 1978 Tigers at old Tiger Stadium in their classic home white uniforms. There is almost perfect uniformity amongst everyone with the navy blue long sleeves. A couple of the batboys and one other guy didn't get the memo. You even have trainers(?) wearing the classic satin jackets, and even a man in a suit in the team photo. ﻿It is sad to see what has become of the old stadium nowadays: 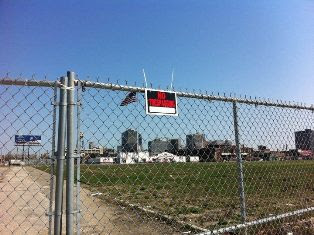 Card Back: Take note Topps. On this card you have a checklist for building a team set. You have 24 players and a prospects card. You pretty much get the whole team in there. It is not like now where some teams get all their guys in the main sets and some teams get squat. Nice, neat alphabetical order, positions, and uni #'s. I wax nostalgic, but I like the simplicity of it instead of all the flash and glamour of today's cards.

Six degrees or less to Seattle: The only player to be on the back to be a Mariner was Lance Parrish in 1992. Jim Slaton would be the Mariner bullpen coach from 2005-2007. Former Tiger Rusty Staub would move down south and be a Texas Ranger in the 1980 season playing with Nelson Norman. Nelson would go north of the border to be a Montreal Expo in 1987 and play with Andres Galaragga. The Big Cat would be a part of the 2001 Texas Rangers which featured a young R.A. Dickey. R. A.(the new author of a book) would spend the 2008 season in Seattle.

Blog related to the team: How could you not be a fan of the team that never changes their look much? As soon as you see that Old English D, you know it is the Detroit Tigers. There is a blogger who loves his Tigers new and old. Dhoff even named his blog after his beloved Tiger favorite. The man loves Coot Veal and the Vealtones. He always is showing off some good stuff and knows how to write a darn good blog post, so go over and give him your attention.

I think that the one other guy is Rusty Staub.