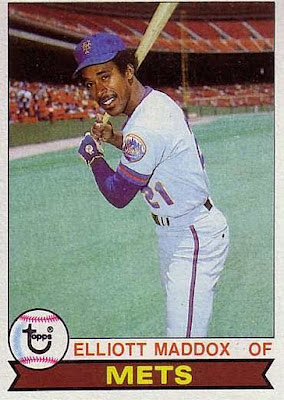 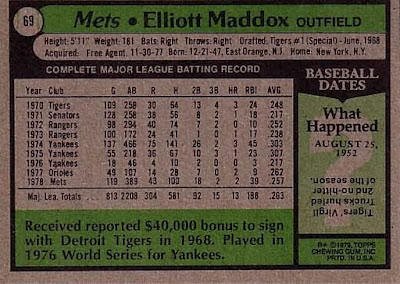 Card Front: Elliott is showing us his stance or showing off to the ladies. He is shining that $10,000 smile looking so like a cool cat. It looks to me like this was at Candlestick Park in San Francisco. The Mets only went there twice in 1978, playing on June 17th and 18th, and August 29th and 30th. I would assume it is probably June by the long sleeves, but it really was warm at the 'Stick﻿. The size of the Mets patch on the sleeve looks so disproportional to everything else.

Card Back: I love when guys have that one random year with a team. After being part of an 8 player deal to leave Detroit, Elliott finished off Washington and went to Texas. The Yankees bought him, and eventually traded him to Baltimore. I guess he didn't like it there opting to move to the Big Apple. After being released by the Mets before 1981, Elliott spent the 1981 season in AAA Oklahoma City as a Phillie farmhand. I also know that a certain blogger will love the Virgil Trucks fact.

Six degrees or less to Seattle: In the same year as this card, Elliott played with a young man that was around forever in Jesse Orosco. In Jesse's travels he was a 1991 teammate of Alex Cole as a member of the Cleveland Indians. Alex would head East and be on the 1996 Boston Red Sox squad with a one time Mariner in Arquimedez Pozo. I mean ONE TIME: he came in to the September 12, 1995 game as a PH for Joey Cora in the 7th inning only to Popout to the 2nd Baseman. He would stay in as a defensive replacement and finish the game, but that was the only time we ever saw Arquimedez as a Mariner.

Blog related to the team: As we all know there are many Mets fans. They might not be as big in numbers or egos as Yankees fans( cheap Mariners fan shot for 1995). One guy that I really used to like to read his stuff has kind of disappeared on us. Mike is a big Mets fans living in New York. He runs two blogs, BA Benny's Baseball Card Buffet, and BA Benny's Pack Rip Cafe. The Cafe hasn't seen a post in over a year, and the Buffet hasn't cooked since 9/11. If anybody knows if Mike is alright let's get him back in the family, and start up the grill at the Buffet or Cafe, because I'm hungry...

I do love the random Virgil Trucks fact. Thanks for pointing it out.

Yes, this is Candlestick. There are a large percentage of Topps cards from the 70s and 80s taken at Candlestick and the Oakland Coliseum because the photographer lived in the Bay Area. I went to an A's game last week and the same guy is still taking photos decades later!