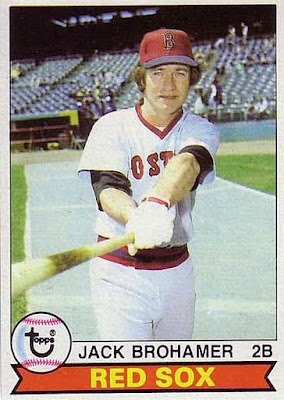 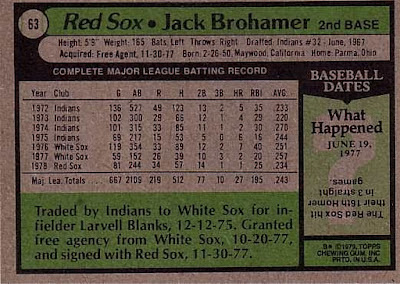 ﻿
Card Front: Here is Jack showing off his prowess as a left handed bat at Fenway Park. I don't know if you can say a .243 hitter has much prowess, but it works for Jack. How can you not love the Pullover jerseys and the classic Sox hat in all it's red beauty. I like that the banner for the Red Sox team name was actually red.

Card Back: It seems that the only time Jack was a full time player was his first year in 1972. Only three other years would he see 100 games, most years seeing platoon duty in the infield. I guess the Indians thought Larvell Blanks was a better infielder than Jack here. It is nice to see the Indians take a home state kid in the 32nd round of the draft.

Six degrees or less to Seattle: Jack would not have a long career in Boston with being purchased by the Indians in mid 1980. One of the players that would spend time with Jack as part of the 1980 Red Sox was Reid Nichols. Reid would change the color of his Sox and be part of the 1986 Chicago White Sox. One of Reid's teammates was Jack Perconte who would spend the 1984 and 1985 seasons as the Mariners second baseman.

Blog related to the team: We all know that there are many fans and blogs that love the Red Sox. One guy that will tell where to sit if you love the boys from Beantown is Ron. Ron is the sole provider of the great blog Section 36. Ron is always coming up with informative and great posts about his team. Head on over and take a seat in his section, and tell him I sent you.