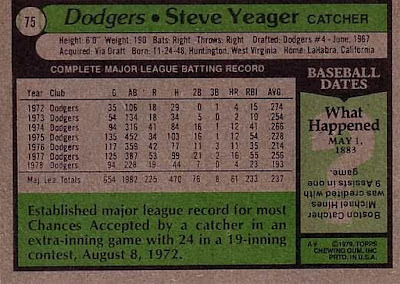 ﻿Card Front: We can tell that it is Steve by his #7. Other than that I'm not really sure there is anything that distinguishes that it is Steve. While I appreciate an in game action shot, couldn't Topps of done a little better job on photo selection? Another thing that gets me and I know many have questioned it, why did the Dodgers get pink on their cards for many years?? If you are any kind of baseball fan, you have to love the beauty and simplicity that the Dodgers uniforms have held to through out the years.

Card Back: We see the beginnings of a long and steady career as the Dodgers backstop. I remember as a kid thinking Yeager was awesome because he was the catcher. Steve would spend nearly his entire career wearing Dodger Blue. Obviously it was a slow progression from being drafted in 1967 to spot duty for two tears to split time, to being the full time guy in 1975.

Six degrees or less to Seattle: As any Dodger fan knows, Steve tarnished his legacy as a Dodger lifer when he got traded to the Mariners. Steve would play in 50 forgettable games as a Mariner in 1986 before retiring. In Steve's last season in LA in 1985, he played with Mariano Duncan. Mr. Duncan would move to that other coast and play with the Bronx Bombers in 1996. Another of those Bombers would be Ruben Sierra. In all Ruben played for 9 teams including a stint as the Mariners left fielder and DH in 2002.

Blog related to the team: Oh Dem Bums! so many fans, so many bloggers that love them. One fan that has been out there for a while and keeps us wanting cards likes to steal home. He is the writer of All Trade Bait, All The Time. As the header on his blog says he is a "card collecting, die hard Dodgers fan." It is simple to give some love to a blogger who spells it out that plainly for us. Go check him out because he always has great stuff up for trade.

That's quite the full beard Yeager is rockin'.

Also, I don't remember him hitting for much power, so I'm surprised to see the four consecutive double-digit home run seasons.

Was Yeager part of that Trio that won the WS MVP for the Dodgers in '81? All I remember of Yeager is that flap he had under his mask to protect his throat from tip balls.

hey there larry, thanks a lot for mentioning ATBATT here. it really is an honor.

ML - yup. yeager put up some solid HR numbers. because of his HR threat, his nickname was "Boomer".

garvey - you called it. it was a shared mvp with boomer, ron cey and pedro guerrero.