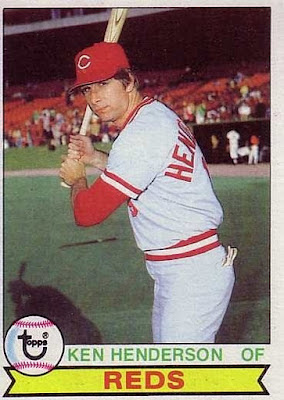 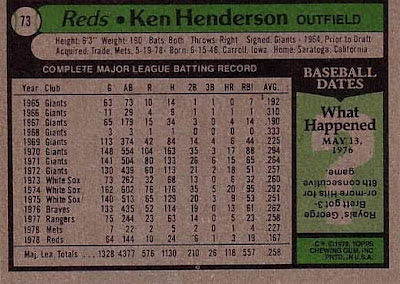 ﻿
﻿Card Front: Ken is showing off his new duds as a Red in San Francisco in 1978. This must have been taken not long after Ken came to the Reds either in June or it could be from late September in 1978. Ken does not appear to be happy at all and just wants to get this over with. I remember how the Reds jerseys in those days didn't have much room for a long last name.

Card Back: It is hard to figure out Ken's playing time through the years. Some years he would play everyday, and some years were hit and miss. It looked as though he would stick with the Giants, but then bounced around to many teams. Ken would spend part of 1979 in Cincinnati before being traded to the Cubs only to be released and retire midway through the 1980 season.

Six degrees or less to Seattle: During Ken's first season in Cincinnati, another of those 1978 Reds was Dan Driessen. Dan would move to be part of the 1985 San Francisco Giants with a young Chili Davis. During Chili's time as a 1997 Kansas City Royal one of his teammates was Hector Carrasco. Hector would be part of the inaugural season of the 2005 Washington Nationals with Brad Wilkerson. Brad made it nearly a month as the Mariner DH in 2008 before being released.

Blog related tot he team: There are few fans of the Redlegs out there. I would think with their long rich history there would be more. One fan that is out there should be in a rock band. Doesn't his blog sound like a band with a name like Potch Wheeler and the Cardboard Heroes. Go over and show him some love, maybe you can work out a trade for some good stuff you both need.