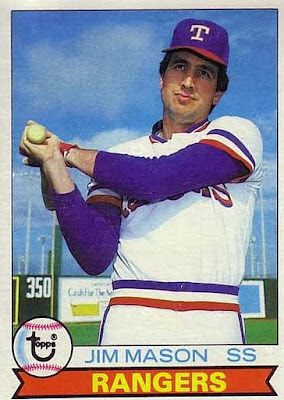 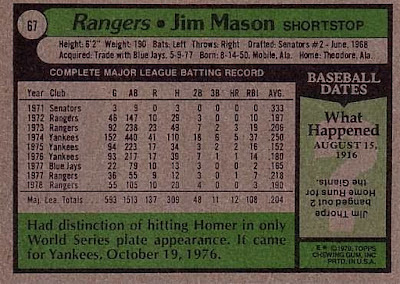 ﻿Card Front: Here is Jim with his tall Rangers hat on and acting like he is swinging his bat. It a nice look to have the ads from the wall at the Rangers old spring facility in Pompano Beach, FL. This is another card where Topps put together the next year's set before deals were made in the off season. Jim was traded on December 8, 1978 and spent 1979 with the Montreal Expos for his last season in the big leagues. As kids back then, we thought he was playing for the Rangers in 1979 since we didn't have the mighty Internet.

Card Back: So many cool things on the back. Research shows Jim played in the last official game of the 1971 Senators. The last game of the season was forfeited to the Yankees when fans stormed the field. Jim also made the very first game in Blue Jays history on April &, 1977 coming in to a snowy game at Exhibition Stadium in Toronto as a PH for Hector Torres in the 4th inning. Jim barely hit the Mendoza Line for his career at .203, and had 105 errors for a .958 career fielding percentage. Only one season saw him see more than 100 games in a season.

Six degrees or less to Seattle: Jim saw only those three games at RFK before the Senators left Washington to move to Texas. One of his Senators teammates in 1971 was Larry Biitner. Larry would eventually find his way to the North side of Chicago as part of the 1980 Chicago Cubs squad. Larry would play with Lee Smith that year. Lee would move north and be part of the Montreal Expos for the 1997 season. Another player on the Expos in 1997 was Jose Vidro. Jose would come to Seattle to be our DH in 2007 and 2008 but fizzled out for the Mariners in those two years.

Blog related to the team: I'm still really surprised with their recent success and superstar players that there aren't more Rangers fans with blogs nowadays. One guy that's been around for awhile is BigD. He is a fan of all things Dallas and he does some great work on custom cards. He will even tell you Hey, That's Mine! Go over and give him a read. He also has gotten his kids into collecting, so maybe you can send something to them too.