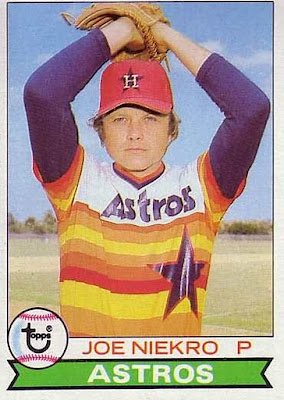 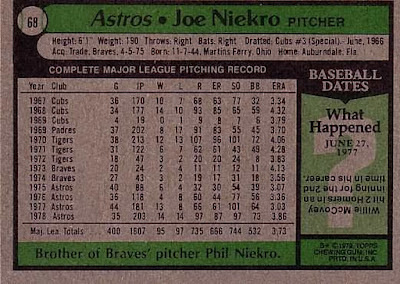 Card Front: Joe is showing us his classic "tequila sunrise" Astros while at the old Spring Training facility in Cocoa Beach, FL. It looks as though somebody forgot to water the grass there, it's looking a little brown boys. I think it would have looked a lot more realistic if Joe actually had a ball in his hand instead of a fist. Joe unfortunately lost his life to a brain aneurysm on October 27, 2006.

Card Back: I love cards that have so many years of stats that there isn't room for much else. As of this card Joe hadn't even reach half of his career wins finishing with 221. ﻿I like how the only line of info is that he is the brother of Phil Niekro. Joe would eventually add two more teams to his resume ending  with 7 teams to his credit. He will always be remembered for trying to act like he didn't have a file in his back pocket to doctor balls with the Twins.

Six degrees or less to Seattle: As a member of the 1982 Astros, Joe was on the field with Denny Walling. Denny would move around and play on the 1990 version of the St. Louis Cardinals. One of fellow Redbirds was Omar Olivares. Omar would play on the 2001 Pittsburgh Pirates team along side Jack Wilson. Jack spent part of the 2009, all of 2010, and part of 2011 with the Mariners.

Blog related to the team: I know I recently saw a new blog out there is an Astros fan, but for the life of me I can't remember which one it was. One that I do know of but hasn't been active for awhile is Cam at The Bullpen Cardboard. I'm not sure if he has gotten busy with school or what but maybe we can bring him out of hibernation and get to blogging about the future AL West team.