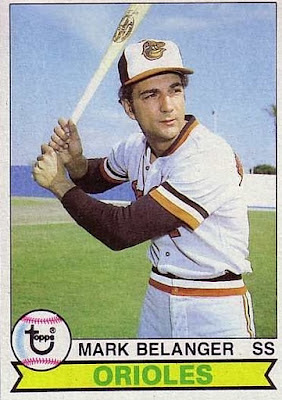 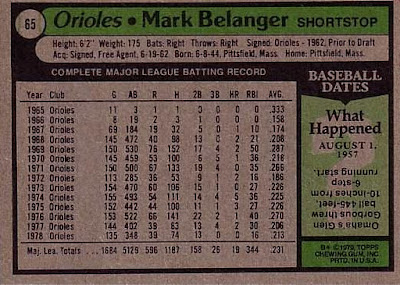 Card Front: ﻿Here is Mark showing young kids what a proper batting stance looks like. For a skinny guy, Mark definitely has big hands, and those serious eyes, but all the while still smiling. I wonder if he could hear the footsteps of the next shortstop behind him? I am very happy to see the Orioles go back to uniforms very similar to these this year, I really missed the cartoon bird.

Card Back: These are the cards that grab at my sentimental side. I love the sight of one team over and over on a veteran player's card. Obviously, Mark would be there until the end of 1981 when #7 would give way to some hotshot #8 at shortstop. If only Mark would have hung it up after '81 and not been a Dodger he would have been another of those whole career with one team guys. I really don't understand the 445 foot throw from August 1, 1957 and its relevance.

Six Degrees or less to Seattle: Most all of Mark's teammates were Orioles at one time. As a member of the 1975 squad in Charm City, Mark played with a young Doug DeCinces. Doug would pack up his game and head out west to the California Angels. While playing third as an Angel in 1987, Doug played with Chuck Finley in Anaheim. Chuck would move to Cleveland and receive a beat down from his wife in 2002, but would also share the mound with a young Cliff Lee. Cliff would be in Seattle for half the 2010 season before being dealt to the Texas Rangers.

Blog related to the team: I know there are happy O's fans right now being ahead of the Yankees and Red Sox in the standings. I think it is great to see new teams at the top. One man that is a happy Birds fan is Ryan. Ryan writes and runs the aptly named O No!!! Another Orioles Blog. Not only is Ryan an Orioles fan, he is also a man who loves that #8 guy, somebody named Cal Ripken Jr but I've never heard of him. Go over and say hi to Ryan and the Birds.

Nice Post! I'm coming around to the cartoon bird being back... I just like the away hats and helmets better than the home ones.