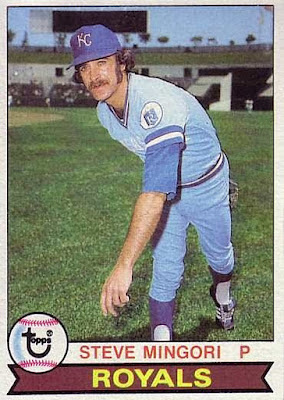 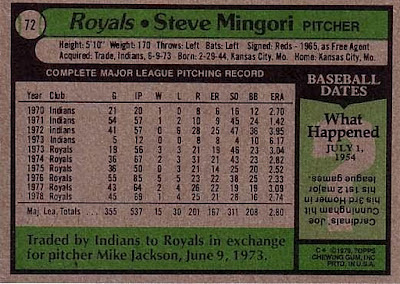 Card Front: Steve is giving us the classic I just threw a pitch off flat ground look. I've never seen a pitcher throw from right field towards the stands, but whatever works. I really do still love the classic Royals powder blue road uniforms. We do have to wonder was this taken in Oakland in 1978 or was it a recycled picture from Topps? I still think KC has one of the most awesome ballparks around.

Card Back: These would be the next to last stats for Steve. He would be released by the Royals after the 1979 season and never pitch again. Steve did spend some time as a minor league pitching coach in the Blue Jays system. It must have been a huge thrill to be traded to, and play for your hometown team. Could you imagine playing for 7 seasons in front of your family? Sadly, Steve passed away in 2008 at the age of 64 due to natural causes.

Six degrees or less to Seattle: During Steve's final season with the 1979 Royals, he would play with the great Frank White. Frank spent many years in KC including the 1990 season teaming with Jeff Conine. Jeff would move around to many teams, while making a stop in Cincinnati. Jeff would be a part of the 2007 Reds with some guy that was in Seattle for a bit named Ken Griffey Jr. I think he spent nearly 12 seasons in the Emerald City.

Blog related to the team: It always surprises me how many Royals bloggers there are out there. One of those bloggers isn't quite right because he is A Hair Off Square.  He has written for quite a while now and does pretty cool customs of his beloved Royals. If you want to see his handy work making cards head over and let him know I sent you.