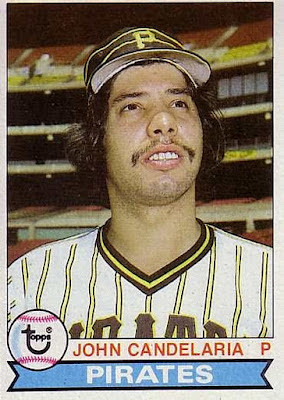 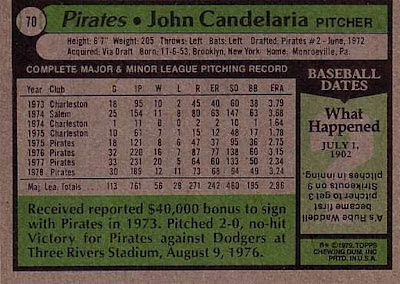 Card Front: John is showing ﻿one of the many uniform combinations that the Buccos would wear in the late 70's and 80's. While I never was a big fan of the Pirates pinstripes, sometimes it did look good. I'm not too sure about the mesh stove top hat though. It seems that something in the upper deck must have gotten the Candy Man's attention. Nice 'stache John.

Card Back: As you can see John was early in his career in 1979. He would end up playing for 8 different teams until the 1993 season. He would never spend more than 3 seasons with any of them except the Pirates which John spent a total of 12 seasons with. The Pirates didn't wait to make John go deep in games with 220 and 231 innings in his first two full seasons. I wonder what a $40,000 bonus equates to nowadays?

Six degrees or less to Seattle: While John would bounce around amongst teams, most of his career was in the Steel City raising the Jolly Roger. During the 1984 season with the Bucs, John would spend time with Mike Bielecki. Mike would move west and be a part of the 1993 Cleveland Indians with Reggie Jefferson. Reggie came to Seattle in one of the most one sided deals with Felix Fermin for Omar Vizquel and CASH! Dumb move on the M's part as Reggie was only here for the 1994 strike season.

Blog related to the team: I really like where the Pirates are headed as a team. I think that they are starting to get closer to respectability again. One of the new bloggers out there I think might be a Pirates fan. If not, he has a beautiful panoramic picture of PNC Park on his blog. Michael runs the new Six-4-Three DP blog. It seems like he does a bit of everything but he like us, loves baseball. Head over and tell him I sent you from the Emerald City.

I am in fact a Buccos fan. I also believe the franchise is finally going in the proper direction with Neal Huntington and Bob Nutting at the wheel. It has taken longer than most rebuilds, but Dave Littlefield made such a mess of it that it couldn't be a quick fix. The next step is getting some free agents to want to sign with Pittsburgh.

I actually had a mini-series about Dave Littlefield's incompetence as a GM. (http://six4threedp.blogspot.com/search/label/Dave%20Littlefield)

Thanks for the shout out! Keep up the good work with your blogs!