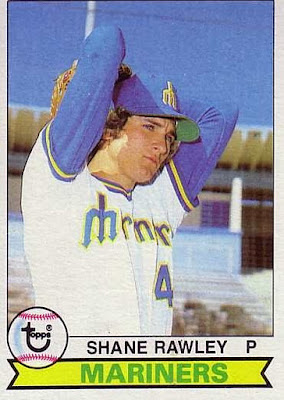 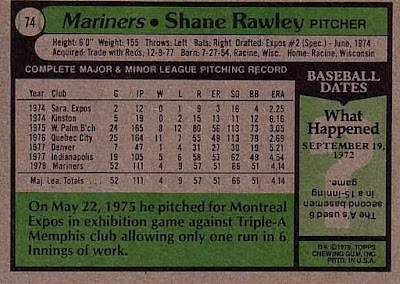 Card Front: Oh the beauty of the original Mariner uniforms. I really do like the look and the simplicity of those duds. Another of those pictures that was taken at Tempe's Diablo Stadium. The M's called it home through 1992 only to have it renovated to become the Angels current Spring home. I wonder if Shane has a ball in his hand, but I would bet he doesn't.

Card Back: You always have to love cards that have more minor league stats than big league ones. How can you not love Quebec City, Denver, and West Palm Beach. Shane would make the most of 1978 as he would spend 4 seasons with Seattle before being traded away. Shane played 12 seasons with the M's, Yankees, Phillies, and Twins. Could the A's manager not decide on a 2nd baseman using 6 in a 15 inning game??

Six degrees or less to Seattle: Obviously Shane was, and is shown as a Mariner. Let's tie Shane to a more recent Mariner though. As part of the 1988 Philadelphia Phillies, Shane played with Kevin Gross in the city of Brotherly Love. Kevin would be part of the 1995 version of the Texas Rangers with ageless wonder Darren Oliver. Darren is still around today as a part of the 2012 Toronto Blue Jays with former Mariner Brandon Morrow.

Blog related to the team: I sometimes think I bite off a lot more than I can keep up with. One blog that I try to update once in awhile but not quite often enough is about the history of Mariner baseball. One of my side projects is at Ride of the Ancient Mariner. Since I'm pumping it up, I guess I will need to get some posts on it more often than I do. Did you know Shane owns his own restaurant in Sarasota, FL called Shaner's Pizzeria which looks like a fun place to hang out.

The A's used 6 second basemen that game because Charlie Finley sometimes ordered his managers to pinch hit for the second basemen every time in order to get more offense.