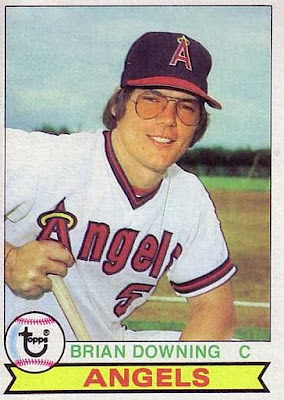 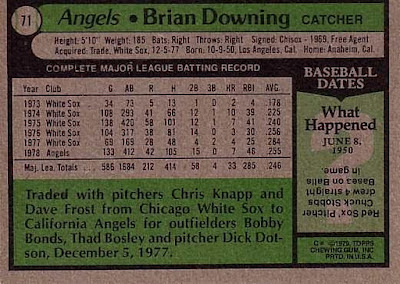 ﻿
﻿Card Front: Brian is showing us the classic down on one knee with a bat pose. You have to admire the awesomeness of the aviator glasses that really have no tint to them. I still love the classic look of the Angels uniforms back in the day with the Haloed A and the simplicity of the whole thing. I feel a kinship to this card being that the photo was taken when the Angels were in my hometown for spring training of Palm Springs, CA thank to owner Gene Autry.

Card Back: We see the beginnings of what would end up being a 20 year career. Brian could not get full playing time while in Chicago, and I'm sure was more than happy to be traded to his hometown Angels. It seems that the players the Angels gave up to get Brain along with Chris Knapp and Dave Frost worked to the Halos benefit. Brian spent 13 seasons in Anaheim and would eventually be inducted into the Angels Hall of Fame in 2009.

Six degrees or less to Seattle: While Brian would spend his last season as an Angel in 1990, he would team up with Dante Bichette. Dante would eventually move to be a part of the 2001 Boston Red Sox along side Manny Ramirez. Manny would find a short stint as a member of the 2011 Tampa Bay Rays. One of Manny's fellow Rays was now 2012 Mariner John Jaso.

Blog related to the team: It is surprising that are so few fans of the Halos. Maybe it has something to do with that darn Rally Monkey. One blogger that went dormant for a long time but pops up every once in awhile is Lance of the Angels Master Set. Lance is a man after my own heart owning nearly every Angels card made, except I'm trying to do it with my lowly Mariners. Go over and check him out and let's see if we can get him back to the blog world full time for some Halos posts.