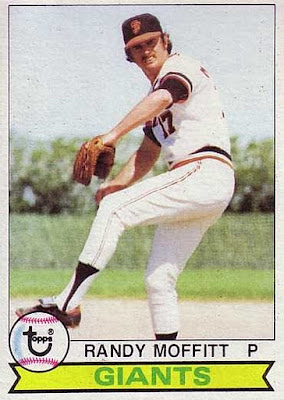 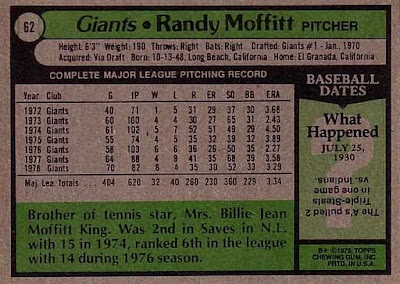 Card Front:﻿ A nice look for Randy in a spring training game. It appears to be a home game in Phoenix during a sunny day. The trees in the background don't give away where they are. I love the classic mid calf pants with the stirrups. At least  this was before the Giants went with orange sanitaries for one year.

Card Back: Randy was in the middle of his time as a Giant in '79. He would stay until late in 1981 in San Francisco. Surprisingly, Randy would only have 1 start in his entire big league career. Pretty athletic family to have a baseball player and a pro tennis player in his sister. I didn't even know a triple steal was possible, but to do it twice!!

Six degrees or less to Seattle: Randy would spend his final season as a part of the 1983 Toronto Blue Jays playing with Tony Fernandez. A new member of the 1990 Blue Jays was the Crime Dog Fred McGriff. Fred would move down to be an Atlanta Brave in 1997 with a young Kevin Millwood. Kevin is part of the 2012 Mariners, and trying to contribute to the rotation.

Blog related to the team: As most of us know there aren't too many fans of the 2010 World Champions. At least as far as card collectors or bloggers. One fan of the Orange and Black has come to the blog world recently and is enlightening all of us. Longtime lurker turned blogger arpsmith is pimping the Giants now. Head over and give ARPSmith's Sportscard Obsession and tell him I sent you if you would like.

Thanks for the shout out, i really appreciate it!

I recall randy moffitt from my youth, didnt recall he only made one start. With their pitching staff, there must have been quite a bit of long relief.