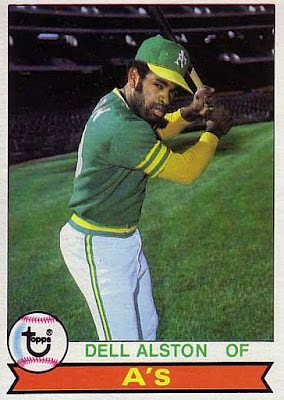 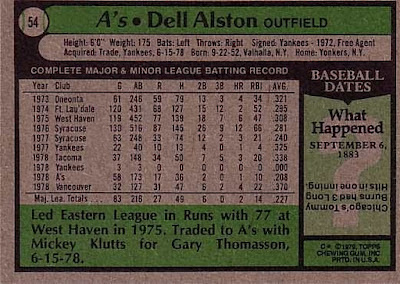 Card Front: I'm proud of Topps for sending somebody to the West Coast to take photos. I was a good thing they did, or they wouldn't have Dell in the A's glorious Green and ﻿Gold. I have to admit the stripes on the shirt and down the side of the pants really do make that green jersey stand out.

Card Back: It looks like Dell was what we would now call a AAAA guy. Not really a minor leaguer, but not a good enough for the bigs. At the end of Spring Training in 1979, the Athletics would let Dell go, only to see him sign with the Indians for the 1979 season. Dell would spend his final 2 years in Cleveland. On my birthday in 1883 Tommy Burns had 3 Long Hits in an inning. Is a Long Hit a HR back in the olden days??

Six degrees or less to Seattle: Because Dell didn't have a long MLB career doesn't mean we can't find him a home in Seattle. In his short time in Oakland, Dell played with Dwayne Murphy as Athletics in 1978. Dwayne would go on to be part of the 1989 Philadelphia Phillies with Terry Mulholland. Terry would come to the Mariners in a deadline trade for Desi Relaford and would finish the 1996 season in Seattle.

Blog related to the team: The A's don't have too many faithful, or no one wants to admit it. One blogger that had been gone for a while looks like he might be coming back. Nathan is a Canuck. He runs the blog at Canadian Cardboard  and one of his teams is the Athletics in Oakland. Read his stuff and let's get him back on the blogging wagon.

I like the color coordination between Dell's uniform, the field and his printed name and position.

I believe that "long hit" is an old term for "extra-base hit".

nice opinion.. thanks for sharing..