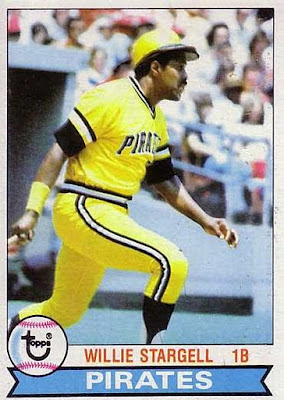 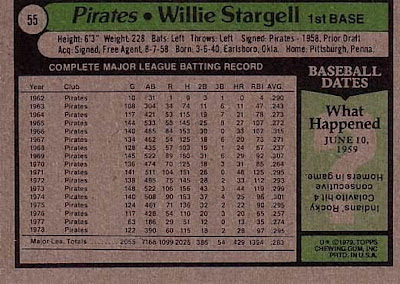 Card Front: Here is the player that started my love affair of baseball. I don't know what it was about "Pops," but watching his windmill of the bat and just the constant smile made me love him. I love how he brought the team together in 1979, created the Stargell stars for good plays, and always came through clutch.

Six degrees or less to Seattle: Willie never came to Seattle with the Pirates. In his final season in 1982, Pops played with Larry McWilliams in the Steel City. Larry would move to the mound in Atlanta in 1987, and play with a young guy named Tom Glavine. Tom would be part of the 1996 Braves when in late June free agent Mark Whiten signed with the Braves. Mark would be traded to Seattle in mid August and finish the '96 season as a Mariner.

Blog related to the team: I really wanted to be selfish and keep the blog love to myself since my son and I are both collectors of Willie. That isn't what this section of each card is for though. I have a feeling the Pirates will do big things this year. Another fan that is keeping that faith and flying the Jolly Roger high is the New Jersey host of Pirates Treasure Room﻿. He even has his girlfriend who collects and loves baseball, what a LUCKY DOG!!

I have some great memories of that 79 pirates team. My grandmother was a big bucs fan and we used to watch some games together when we would visit her.

I just watched a review of the 79 season not long ago on the MLB Network, good stuff..

those card numbers sure are small on the 79s though..not much of an issue in my youth, but now more of a challenge..

I never got a chance to watch Willie play, but I do have the 79 WS on DVD and I think you hit it right on the head with his leadership and smile. He was a guy that just loved to play the game of baseball. Thanks for the link to my blog. I'm going to be showing off some vintage Pops goodies in the near future.

Here in Alameda, Encinal High School has named the baseball field after him and there is a new street called Wilver Stargell Parkway. Pops, Curt Motton, and Tommy Harper all played at Encinal together.