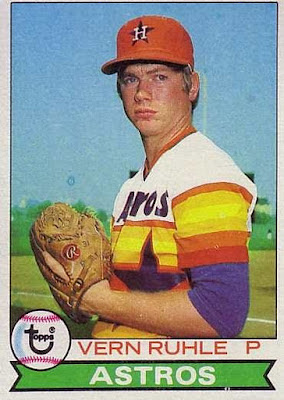 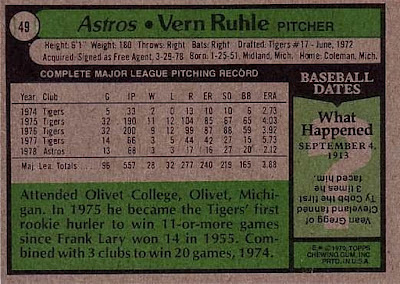 Card Front: I wonder why Vern looks so glum? It can't be the colors of his jersey or hat because they are bright and cheery! Maybe it was just a warm day in Florida. I don't know about all you fans, but I'm excited for the Astros 50th so they can wear these again. I don't know yet about them being in the AL West next year.

Card Back: How awesome of a feeling must it have been to not only get drafted, but play or 4 years for your hometown team? I'm sure it is every kid's dream story. The Tigers felt they could let Vern go for other  players they had coming up. He would spend a number of years in the Astrodome in Houston, before Cleveland and Anaheim to finish his career.

Six degrees or less to Seattle: In the summer of 1982, Vern was an Astro with Frank DiPino. Frank would move on to play for the Royals in Kansas City in 1993, and hang out with Tom "Flash" Gordon. Flash would be a member of the 2003 Chicago White Sox with a young Joe Borchard. Joe saw the batter's box 9 times in 6 games for the Mariners in 2006 before being waived in the end of April.

﻿Blog Related to the team: I feel for the fans of the Astros. You have a team that was pretty good for a long time and have had some really good players. Just a few years ago in 2005 they were in the World Series. The team has fallen on hard times with an inept ownership group. Hopefully that will change starting this year. One man keeping the faith is Sam of The Daily Dimwit. When it comes to cards, breaks and trades, he is no Dimwit my friends.

Do I detect some fear in Vern's eyes? Perhaps he senses he will one day have to play for Cleveland.