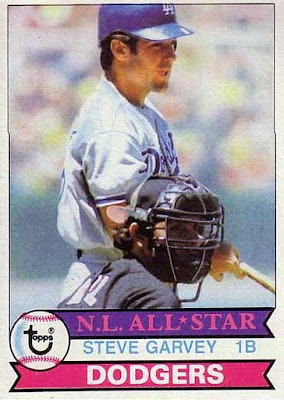 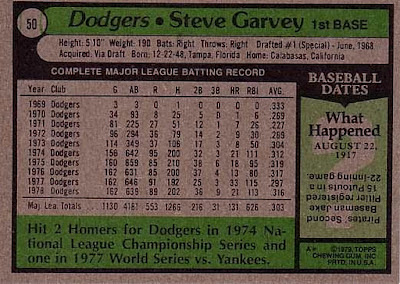 ﻿Card Front: Here we see Steve in the box against the hated Giants and catcher Marc Hill. It seems like Marc isn't sure what pitch to call and has to look to the dugout for guidance. I know that people have troubles with the colors associated with teams, but I wish Topps would go back to the All Star banners of old.

Card Back: Steve would get a taste in '69 and '70 before seeing good time for the next two years. By 1973 he took over full time. Mr. Garvey would continue to shine year in and year out for the boys in blue. When he would eventually leave and head down south to the Padres it just never seemed right to me.

Six degrees or less to Seattle: Steve would only play for two teams in his career. He would play some of the great players of the 70's and 80's. During the 1980 season, Steve played with a young Steve Howe. Mr. Howe would have his share of drug troubles and would be in and out of the game many times. Howe would be part of the 1996 New York Yankees with Jeff Nelson. Jeff spent time with the Mariners on 3 different tours with the team.

Blog related to the team: We all know there are many fans that have their blood run Dodger Blue. One blogger has Steve right in his name. I'm sure you all know Jim from Garvey Cey Russell Lopes. He has been at this blog thing a long time is one of the greats, the granddaddies of card blogging. I applaud him for helping me remember my grandma's favorite infield in my youth.

Garvey played with john hale who was picked up by the m's in late '77. Not as interesting as the steve howe connection though.

Thanks for the plug!

The Garvey cards were some of the most prized of my youth. Very impressive stats.....all those 200 hit seasons, the consecutive games streak, and excellent power numbers for the time.