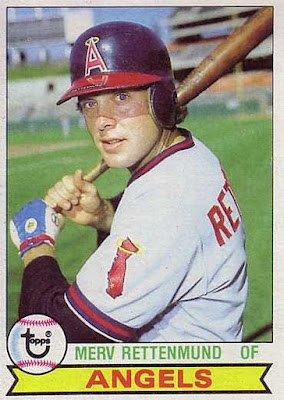 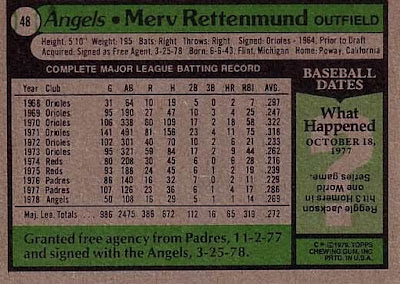 Card Front: Here is Merv showing off to the camera. I may not be big and strong, but I can get the job done. I really dig the two tone batting glove with the little velcro loop belt to tighten it on the left hand. The most awesome is the old California Angels logo on the arm, since now they name 15 different cities in their title.

Card Back: Merv did do some bouncing around, except for a few years in the NL he's all AL baby. It is hard to comprehend a guy that doesn't have much offense, but was a good outfielder won two rings in the 70's. While he lost with the Orioles in the '69 and '71 series, he won in 1970 with the Birds, and again in 1975 with the Reds.

Six degrees or less to Seattle: Merv spent a little time in the Brown and Gold of the Padres. Another member of the 1977 Swingin' Friars was Dave Winfield. Dave would eventually move on and be part of the 1995 Cleveland Indians that would beat the Mariners in the ALCS. Also on that Indians team, was a young Manny Ramirez. Last year before being suspended, Manny was part of the Tampa Bay Rays with John Jaso. John is going to be the backup catcher in 2012 for the Mariners.

Blog related to the team: Friends of the Halo are hard to come by. I have a feeling with Albert being there now though, the fans will hit the Internet. One site that's been around for awhile is Halos Heaven. If you are an Angels fan, it is a very informative site for news and notes.