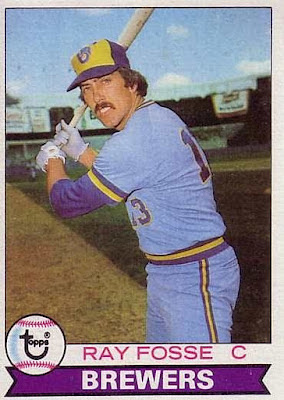 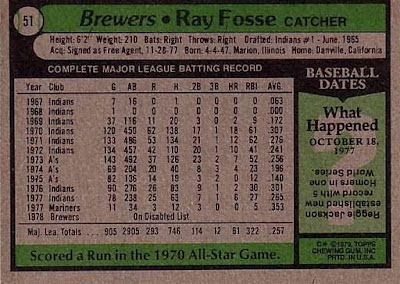 ﻿Card Front: Ray is looking rough and tumble in his photo time at Yankee Stadium. Yes boys and girls the Brewers used to be an AL team. We all know that his career was never the same after that fateful 1970 All Star game. While I give him style points for the stache, the big winner is the two tone hat with the "MB" logo of old.

Card Back: I like how a guy who didn't even play in 1978 gets a card with his new team. As you can see the '70 All Star game was his undoing, his stats were never the same after it. I like that they mention his scoring a run in that game. I guess going to the A's was a good thing because Ray did win rings with them.

Six degrees or less to Seattle: Yes Ray did play a handful of games for the inaugural Mariners in 1977. As a part of the 1976 Indians Ray was teamed with John Lowenstein. John would move on to Baltimore and play with Eddie Murray in 1984. Eddie was a part of the 1993 New York Mets(I don't remember that) along side a young Josias Manzanillo. Josias was with the Mariners in 1997 until a Manny Ramirez comebacker hit him where it counts without a cup.

Blog related to the team: The Brew Crew has their fans even without their big boy first baseman. One great blogger lives even farther North and out of the way than me. The man that loves his Brewers is in Alaska, but you might know Mark as the cynicalbuddha. He is the sole proprietor of the great Collector's Crack. He is a man that knows his TTM's, loves vintage, and is always working on a great Top 100, so go give him a look.