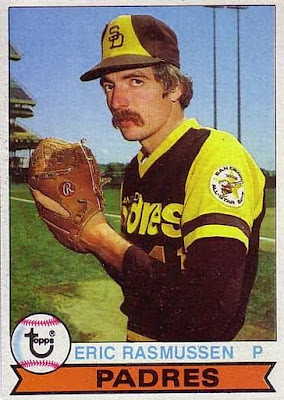 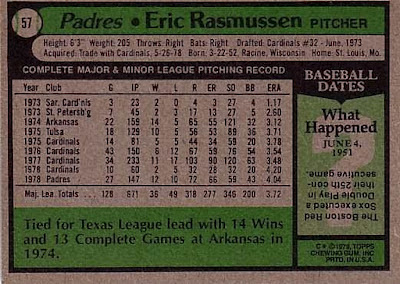 Card Front: The look that Eric is giving off frightens me. I have a feeling it either scared me or made me laugh back when I was 8 years old. I must admit the big eyes and moustache are definitely different. I can't say enough about how much I love the Padres jerseys from 1978 with the two tone and the All Star patch- nice look!

Card Back: It didn't take him too long to make it to the bigs and stick around. While his numbers weren't off the charts, the Padres saw something in him. They were willing to give up a good hitter in George Hendrick. Eric would be a Padre, play in Mexico and make his way back to the Cards in 1981, nice work San Diego.

Six degrees or less to Seattle: At the end of Eric's big league career he spent a couple months as a Royal in Kansas City in 1983. ﻿One of his fellow Royals Butch Davis. Butch would move on, and in 1994 be part of the Texas Rangers with Darren Oliver. Darren has been everywhere, but in 2010 was back with the Rangers. A new guy on that Rangers squad was Mark Lowe. Mark came to Texas with Cliff Lee in a trade with the Mariners.

Blog related to the team: Even with asking people to sign up for a team, some teams got no love. The Padres got have one guy, but we will feature the other today. One of the few that have love for the Brown and Gold is an on again off again. When he's on, he is dynamite! That's right the other Padre lover is the great Punk Rock Paint. He comes and goes, but he does cool stuff and has some great custom cards.

That is a classic look. I've got Eric's and some other seriously weird looks on a post you might want to check out: